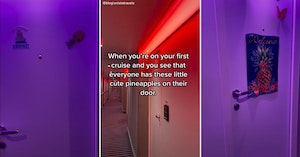 A TikTok video by an individual who was on a cruise ship for the first time shows them making a surprising discovery that seemed cute at first, until they found out the underlying meaning from the comment section.

The video, made by Dominique of Blogionista Travels, has now gained over 11.8 million views after people widely teased her for pointing out the “cute pineapples” everyone was hanging on their room doors.

“When you’re on your first cruise and you see that everyone has these little cute pineapples on their door,” the overlay text reads as the camera pans down the cabin hallway.

“Awww how cute, I wonder what’s the occasion,” she writes in the video description.

It’s less of an occasion and more of a secret symbol to signal to others that you’re down for a certain type of activity — one which is not uncommon on cruise ships. As one commenter explained, it means that “drop-ins are most welcome… and bring friends.”

They’re swingers. Apparently, the pineapple is a widely recognized symbol among people who enjoy swapping sex partners to signal to each other that they’re down to clown.

This is especially true if the pineapple is angled downward, the leaves pointed toward the floor. Don’t go thinking that every pineapple is an indication of swinging, because it’s also considered to be a symbol of hospitality and is often seen on cruises to tropical areas

One of the fruits seen in the video, however, is definitely angled in a way that indicates a swinger cabin. Judging by many comments, swinger clubs love to go on cruises, and many people learned about this symbol for the first time from going on a cruise without any intention to swing and noticed the pineapples, then started asking questions.

The meaning of the pineapple, especially in certain angles and contexts, has been confirmed many times by various reputable sources. Men’s Health explained the phenomenon earlier this year.

“Are people actually using the pineapple symbol to meet other swingers? Absolutely,” says Rachel Wright. “On dating apps—especially those geared toward non-monogamous arrangements, like Feeld—people may use pineapple emojis in their profiles to signify their swinger status to other users. You’ll also find pineapples all over swinger-related content on Instagram and TikTok (check out #swingtok and see for yourself).”

Although some may find the idea of swinging to be a bit shocking, it’s one of the most common forms of non-monogamous sexual activity involving dedicated partners out there. A surprising number of married couples find relief from urges not quite satisfied by a monogamous relationship by joining clubs and going to parties in which swapping partners is the norm.

It’s so common that one swinger who spoke with Men’s Health said all it takes is a trip to the grocery store. Put an upside-down pineapple in your cart, walk around for a while, and see what happens. Or don’t, actually, if you don’t want an awkward conversation.

Those who were already in the know threw a lot of good-natured teasing Dominque’s way, although based on her own comments, it seems like she knew all along.

“They want to be friends,” said one TikToker. “Good friends.”

“They’re all pastors and when it’s upside down that means they’re having Bible study just go on in and say hi,” another joked.