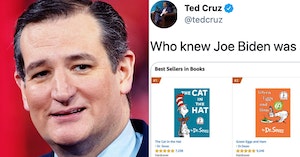 On Wednesday, Dr. Seuss Enterprises announced that they had made the decision to discontinue printing of six of the books that they own the rights to because they contain depictions of people of color that have been considered highly racist for decades now.

In response, Republicans are pointing the finger directly at President Joe Biden in spite of a complete lack of evidence that he had anything to do with the publisher’s decision.

Senator Ted Cruz is, of course, jumping on board this train. He quickly tweeted out a screenshot of Amazon’s best sellers list showing all eight of the top spots to belong to Dr. Seuss’s books. Apparently, conservatives are now snatching up these children’s books like hotcakes even though none of those on the best sellers list were among the six that were retired.

“Who knew Joe Biden was such a great book seller,” Cruz wrote.

Dr. Seuss Enterprises did not mention Biden or any other Democrats in their announcement on retiring six of their books, but rather cited educators and experts on the subject matter.

“Dr. Seuss Enterprises listened and took feedback from our audiences including teachers, academics and specialists in the field as part of our review process,” they said. “We then worked with a panel of experts, including educators, to review our catalog of titles.”

Since Joe Biden has never been a teacher, Twitter folks are confused as to how Cruz made the connection between Dr. Seuss Enterprises and the current president. Neither has ever claimed any association between them.

But Cruz is far from the only Republican cashing in on “cancel culture” hysteria over this announcement. Every high-profile member of the GOP seems to lately have to go into full meltdown every time a company makes any change with the goal of making the world a little bit more inclusive and friendly to all people. This includes a small branding change to an old spud-based toy.

Cruz has also made sure to take this as an opportunity to promote his own book.

He may also be trying to drum up controversy so that people forget how he flew off to Cancun while his constituents froze and boiled water to use the toilet during the snowstorm in Texas last month. But it’s not like any news outlets are bringing that up every chance they get or anything.