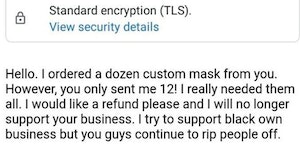 Customer Who Ordered A Dozen Masks Complains They Only Received 12

A disgruntled customer’s angry email is going viral on Twitter, reminding everyone that the American education system could really use some work.

The exchange was shared by @Phil_Lewis_, but was directed at Zada’s Vault, a Black-owned company that sells custom products including shirts, stickers, and at one point, masks.

In the first email, the customer got right to the “problem” — “I ordered a dozen custom [masks] from you. However, you only sent me 12! I really needed them all.”

Knowing that a dozen equals twelve is one of those incredibly basic things that most of just assume everyone else knows. It’s not like converting between imperial and metric, or anything a little more complex. “Dozen” is used in day-to-day life all the time—and yet.

The business owner politely corrected the customer and even generously offered a discount on their next order, despite the rudeness they came in with. The customer responded by doubling down on having needed 20 masks and saying they’d “never heard it as being 12.”

People in the comments were flabbergasted that someone who is presumably a grown adult in charge of an actual event believes that a dozen somehow equals 20.

Some chimed in to say they’ve had similar miscommunications with people.

The business owner’s patience was also praised — especially in the face of the customer’s incredibly rude comment that they “try to support black [owned] business but you guys continue to rip people off.”

Apparently, the ridiculousness has also helped out Zada’s Vault, as the owner tweeted that her orders went up after the emails went viral.

“This is beyond amazing! I’m truly grateful,” she wrote. “I’m going to need to hire a dubzen more staff.”