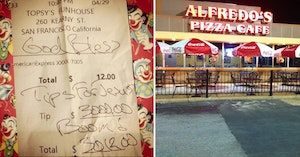 Customer Tips Server $3000 ‘For Jesus’ Before Disputing Charge, Is Now Getting Sued

A waitress at a restaurant famous for appearing on the hit show The Office was elated when she received a $3,000 tip one night on a small order as part of a social media campaign called “Tips for Jesus” designed to encourage this type of kindness.

Unfortunately for Mariana Lambert, a server at Alfredo’s Pizza Cafe in Scranton, Pennsylvania, the customer later disputed the charge on his credit card, refused to work with the restaurant owners, and is now facing a lawsuit.

The original story went viral back in July, at the height of fears over skyrocketing gas prices and other costs of living increasing, squeezing low-wage workers like restaurant servers whose pay is not rising with inflation. For Lambert, the huge tip, left by a man now identified as Eric Smith, was such a blessing that it moved her to tears.

“When the time came to pay his check, Lambert came into my office with tears in her eyes and shaking, stating a customer was leaving her a $3,000 tip on his $13.25 bill,” said Alfredo’s manager Matt Martini.

“It really meant a lot to me because everyone’s going through stuff,” said Lambert herself. “It really touched my heart.”

Smith reportedly said he was “involved in cryptocurrency” and wanted to give something back to those less fortunate. Of course, considering what happened to the cryptocurrency market this summer, his fortunes may have turned, which might explain why he ended up disputing the $3,013.25 charge on his credit card months later.

According to another of the restaurant’s managers, Zachary Jacobson, the business contacted Smith over the disputed charge once they learned about it, hoping that something could be worked out, but they say he stopped answering their messages. It sounds like Alfredo’s was forced to return the money, but they refused to take it back from Lambert, so they’re now $3,000 in the hole during a difficult economic period and feel there is no choice but to sue.

And, in fact, Smith was the one who suggested that action in the first place.

“We’re just out of this money at this point,” said Jacobson. “And he told us to sue him. So that’s what we’re going to end up doing, I guess.”

“Tips for Jesus” appears to have originated on Instagram with an account that encourages people to submit photos of restaurant receipts with massive tips, some going as high as $10,000, all with “Tips for Jesus” written somewhere.

It appears to be a genuinely altruistic campaign for those with a lot of extra money to pass along some of their wealth to those who really need a boost, like Jesus would want you to.

But it doesn’t count if you screw a whole restaurant over by disputing the charge later. That’s messed up enough for Paul to specifically bring up at the gates of heaven, just FYI. Now not only does Smith have a lawsuit on his hands, he’s created a restaurant staff’s worth of people who are deeply disappointed after he raised their hopes for humanity.

“We thought somebody was actually trying to do a good thing,” said Johnson. “And then now we are, what, three months later? Not even, and there’s nothing. There’s nothing to show for it at this point.”