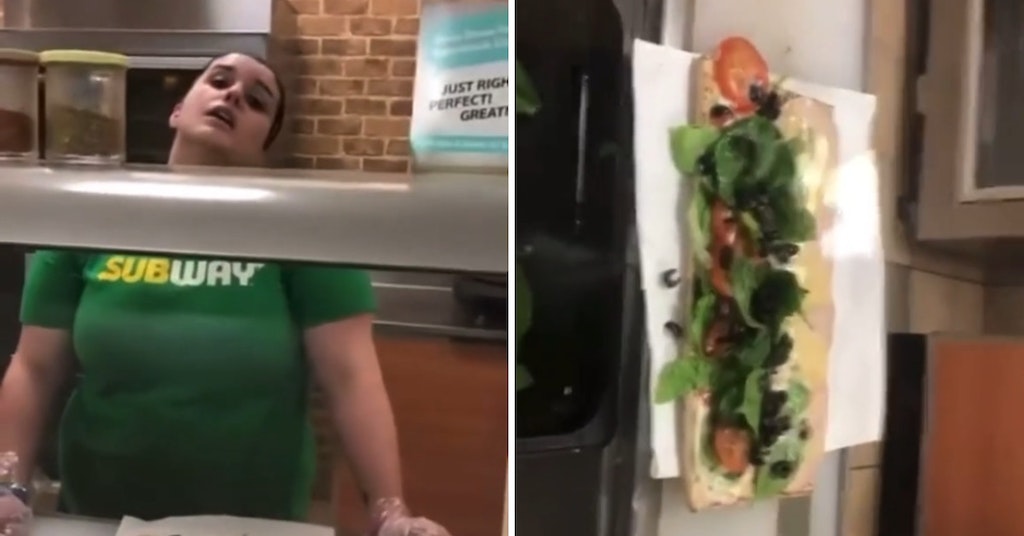 A Subway customer who was apparently very displeased with the way the sandwich maker was constructing her sub had found that her shaming video backfired, with TikTok users following the account “@stupidarguments1” widely siding with the worker. The video makes it entirely unclear what the customer’s problem was, but she kept claiming that it was somehow being made wrong as the exasperated employee demanded to be treated with respect.

Maybe she’s never been to a Subway restaurant before, but for $7 for a 12-inch sandwich, yes, the underpaid and poorly treated workers pretty much just throw the requested ingredients on the bread. If you want a carefully constructed sandwich, it’s going to cost a bit more.

The employee tries to speak and objects to being filmed, but the customer repeatedly interrupts her attempts to explain something, though it’s unclear what about cheap sandwich-making needs to be explained. Finally, the worker gets a word in.

“Ma’am, do you want me to finish making your sandwich?” she asks.

“Do you want to make it correctly?” the customer shoots back.

With the sandwich in full view of the camera, it’s difficult to tell what could possibly be wrong with the sandwich in question. It appears to be a collection of ingredients laid out on bread, which is the definition of a sandwich.

At this point, the worker is done putting up with people treating her badly.

“I will when my customer talks to me correctly,” she says. “Is there anything else, ma’am?”

“Cucumbers,” says the customer. “And put the stuff towards the end of the bread, correctly.”

What she could mean by this when the sandwich’s components are already spread out across the bread is beyond anyone’s imagination, so the worker kind of squishes everything down onto the bread and asks if that’s better. Of course, it’s not. The customer calls the employee a “b—h” and the worker’s gloves literally come off. The customer demands her name and to get her face clearly on video, which the sandwich maker freely facilitates, perhaps sensing how the internet would feel about this interaction.

“Real f—ed up, real f—ed up individual,” the customer claims as the worker makes a forced smile at the camera.

As the customer again tries to complain about the sandwich, claiming “you know that sandwich ain’t right,” and the worker gives up and walks away.

Perhaps this customer was not aware of the public sentiment shifting away from the “the customer is always right” attitude in favor of workers demanding to be treated with basic respect and not tolerating abuse, especially among younger generations. Once the video landed on a popular TikTok account, the vast majority of comments pouring in supported the Subway employee, Bernice, and condemned the customer for being ridiculous and rude.

“How u wanna disrespect someone that’s touching your food,” asked one commenter.

“We hardly got people who will work and then customers like this,” said another.

Plenty of other TikTok users declared themselves to be on “TEAM BERNICE.” We all hope Bernice gets a better job where she’s treated right soon.