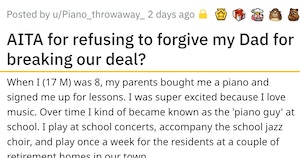 Redditor u/Piano_throwaway_ took to the subreddit “Am I the Asshole” (AITA) to wonder whether or not they are in the wrong for refusing to forgive their father for breaking a deal.

I know how I feel about this one, but I’m curious what you guys think, so let’s check out OP’s story.

When I (17 M) was 8, my parents bought me a piano and signed me up for lessons. I was super excited because I love music. Over time I kind of became known as the ‘piano guy’ at school. I play at school concerts, accompany the school jazz choir, and play once a week for the residents at a couple of retirement homes in our town.

At 15, OP wanted to quit, but his parents persuaded him to stick with it. His dad promised a new car of OP’s choice – no parameters – if he stayed with the piano. OP said yes!

When I was 15, I started to talk about quitting lessons, and my parents quickly tried to guilt me out of it. I told them I wanted to try other things, and that between piano and studying, I didn’t have much time left for other extra curriculars. My Dad proposed a deal. If I kept playing and taking lessons until I reached level 10 RCM (Royal Conservatory of Music), and continued to keep my grades up at school, he would buy me a new car of my choice. I jumped at it and we shook hands on the deal.

OP also explains that the family is very well off, but he has not been raised to be spoiled.

I should explain that my family is well off financially. I have a very privileged life, but I wouldn’t say I’ve been spoiled. If I ever want a luxury item like a new phone or game console, I have to buy it myself with money I’ve saved from summer and after school jobs.

However… OP’s dad is also a fan of loopholes and of getting out of fair wins / losses. Because, I guess, life isn’t fair.

I should also explain that my Dad’s big on loopholes. When we compete, he always finds a way to win, and when I do it doesn’t count because of some loophole. It drives me nuts, but he thinks it’s hilarious. Whenever I complain about him not playing fair, his answer is always the same: life isn’t fair.

Anyway, OP kept up with his end of the bargain and years went by; he told his dad the car he picked.

So, because of our deal, I kept up with my lessons. I spent about 1-2 hours a day on piano, while keeping my grades up. Last summer, I took my level 9 RCM exams and passed, fulfilling my part of the deal. II told my Dad I’d chosen the BMW X5 plug-in hybrid SUV.

On his birthday, OP’s dad got him the car… a toy car.

A couple of months ago, on my birthday, I came downstairs for breakfast, and my Dad told me there was a surprise waiting for me in the garage. I ran out, and sitting in the middle of the floor was a 1/24 scale, toy BMW X5. My Dad burst out laughing and said, “A deal’s a deal, so as promised here is your brand new BMW!” My heart absolutely broke.

OP’s dad said he wasn’t going to buy a 17-year-old a new luxury car (FAIR) and they could talk about getting a more reasonable vehicle.

I asked if he was being serious, and he said I couldn’t seriously have expected him to buy a 17 year old a real brand new BMW and that we could discuss getting me a reasonably priced used car.

OP pointed out the deal they made. Dad shrugged it off.

I said we had a deal and I fulfilled my end of it, he said he did too since I never said that the car had to be full size and drivable. I said he wasn’t being fair. His response: life isn’t fair.

OP feel betrayed and cheated, but his dad doesn’t seem to register that anything was wrong here. So… who’s the jerk?

Ever since this happened, I’ve been distant with my Dad. I honestly feel like he betrayed my trust and that he deliberately made a fool out of me. He keeps bringing up the idea of a used car, but I told him I’m not interested, which I admit is kind of petty. I have enough money saved that I can buy a cheap used car myself, and I just feel like if I accept one from him now it’s like saying that breaking his promise didn’t matter and that he didn’t do anything wrong. AITA?

Reddit hates when parents, you know, make any form of mistake, so they came down hard on the dad.

“As a parent I feel that while life isn’t fair, I as a person am. Life will be unfair to them all on its own. My children don’t need me to do it too. My job is to teach them how to handle it when life kicks them, it is not my job to kick them first. This guy is such a jerk. A mean jerk. NTA,” wrote another person.