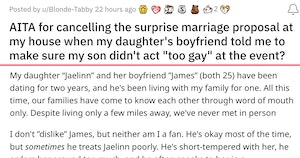 We have an absolute doozy of an AITA post from Reddit’s u/Blonde-Tabby today. We have everything I personally loathe: wedding behavior, homophobia, bad boyfriends… All of it!

Let’s check out the story behind “AITA for canceling the surprise marriage proposal at my house when my daughter’s boyfriend told me to make sure my son didn’t act “too gay” at the event?” and you can all vote on if OP is a jerk in the comments.

OP explains that their daughter and boyfriend have been living together and dating for a while.

My daughter “Jaelinn” and her boyfriend ”James” (both 25) have been dating for two years, and he’s been living with my family for one. All this time, our families have come to know each other through word of mouth only. Despite living only a few miles away, we’ve never met in person

OP is not a great fan of this boyfriend. The BF can be a bit of a dick, to put it bluntly, and is radically right-wing.

I don’t ”dislike” James, but neither am I a fan. He’s okay most of the time, but sometimes he treats Jaelinn poorly. He’s short-tempered with her, he orders her around too much, and he often speaks to her in a condescending tone. Perhaps equally disturbing, his attitudes toward just about everything are radically right-wing

While OP tries to be open-minded, this guy just isn’t their cup of tea. That’s fine. Until…

He’s not a “bad” person per se; he just has an unpleasant disposition imo (most of the time) and is my polar opposite. Jaelinn is nothing like him, either. I guess it’s true that opposites attract

OP’s son is bi and this boyfriend has a serious problem with it. He treats the son poorly.

Through all this, my biggest problem with him is his attitude toward my son “Devon,” who’s bisexual. James never has said anything overtly hateful, but his phobias are obvious (rolling his eyes or snickering under his breath when he thinks no one’s looking). He says he isn’t against the lifestyle, but he doesn’t believe in it. When I asked him why, he said, “It’s hard to explain.”

The daughter seems oblivious and is too, in OP’s view, easygoing.

My daughter, for better or worse, is highly suggestible. She’s also a very easygoing individual who defers to him more often than she should.

So we have this homophobic jerk dating OP’s daughter and now the jerk wants to propose. OP said yes, sure, and would host the proposal.

A few weeks ago, James told me he was planning to propose to Jaelinn on Valentine’s Day and wanted to invite his family for the event. Naturally, I thought it would be wonderful for everyone to be in attendance, so I agreed.

And then the demands come…

But the last few weeks have been pure hell. The first remark: “Be sure you don’t turn on the television while my parents are here.” Followed by, “Don’t serve store-brand chips or soda for snacks.” “Don’t correct my parents’ grammar.” “Make sure the bathroom is clean”…

OP called it out and the guy DID NOT QUIT IT.

It’s been one thing after another. I finally said, “Look, you’re starting to piss me off. How much of a moron do you think I am? Do you think I’ve never entertained before?” He laughed it off, saying he was just nervous and that he didn’t mean to offend. But he didn’t stop.

Then James asked for OP’s son to “not act too gay”, whatever the hell that means. OP had enough. No more proposal.

Last night after dinner, he pulled me aside and said, “One more thing. You will make sure Devon doesn’t ‘go off the deep end’ in front of my parents? You know… make sure he doesn’t act too gay”

That was it—the proverbial last straw. I lost my temper, revoked the invitation, and told him to find somewhere else to propose.

THEN this absolute loser of a BF changed his mind about proposing entirely! WT ACTUAL F this guy.

This threw the whole house into an uproar, and there was no way to avoid Jaelinn finding out about it. She was furious with me. She said James changed his mind about proposing to her altogether and that it was all my fault. She said I “ruined her life”

At first, Devon supported me and so did half our family. Now even Devon says I should have kept my mouth shut and put up with it a little bit longer

So: was OP wrong for not being cool with this crap? Obviously no.

Update: She’s still not speaking to me. I saw them bring some boxes up from the basement, so I think my worst fear is being realized. If she moves out with him, I don’t know what I’ll do. I won’t be able to protect her at all 🙁

Info: This happens to me all the time, so I should have made it clear: I’m Mom, not Dad. “Dad,” and I use that term loosely, is an abusive jerk who abandoned the family 8 years ago

Thank you to everyone for your expressions of sympathy and encouragement. Yes, there’s a chunk of YTA votes out there, and I get it. But for those of you voting NTA and offering your well-wishes, it means so much to me. It’s still a cluster****, but you’ve made me feel so much better about the whole mess

“NTA. If he doesn’t want to propose because you refuse to make your son “not act gay” … he’s the problem here – forget all the other stupid shit you put up with … He’s literally telling your daughter that because her brother is bisexual, he doesn’t want to marry her. The narrative on this needs to switch around to what it actually is,” wrote one user.