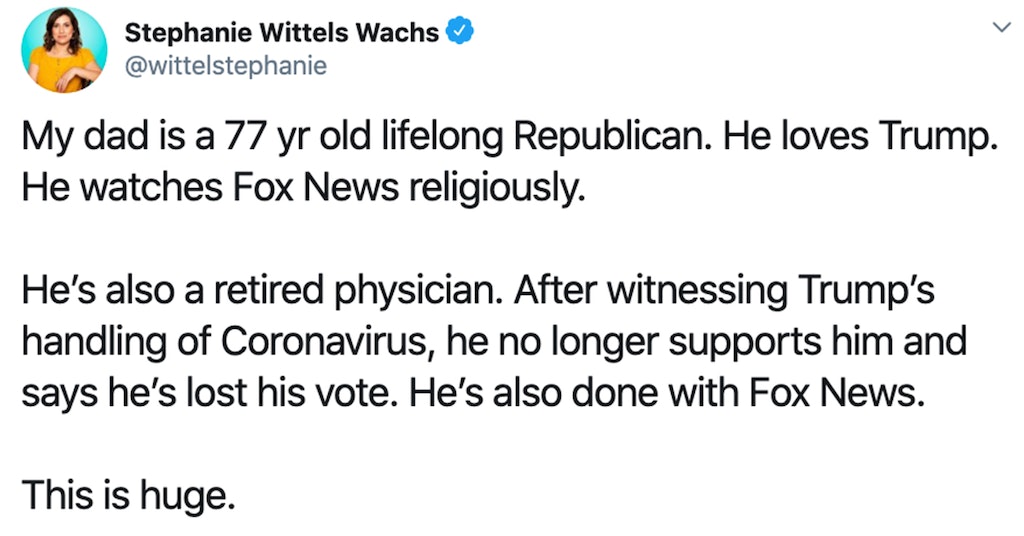 As cases of COVID-19 rise all over the U.S. and the world, citizens are wondering what the hell is going on and what they should be doing to protect themselves and each other. Reports from overseas are grim. Italy is on lockdown and people are dying in hospitals whose resources have been stretched to the max. People here are being advised to stay home as much as possible to slow contagion, but the government response is lagging to an extremely dangerous degree.

Trump’s supporters are die-hard, but now that it seems like they might actually die…hard, their faith in their leader is being shaken. Well, a few of them with the sense to know how badly he is messing up.

A writer named Stephanie Wittels Wachs shared her story about her dad, a retired doctor, who’s changed his tune since the pandemic hit.

She wrote on Twitter, “My dad is a 77 yr old lifelong Republican. He loves Trump. He watches Fox News religiously. He’s also a retired physician. After witnessing Trump’s handling of Coronavirus, he no longer supports him and says he’s lost his vote. He’s also done with Fox News. This is huge.”

My dad is a 77 yr old lifelong Republican. He loves Trump. He watches Fox News religiously.

He’s also a retired physician. After witnessing Trump’s handling of Coronavirus, he no longer supports him and says he’s lost his vote. He’s also done with Fox News.

A few people have responded that they’ve experienced something similar with their own parents:

My parents, also in their 70’s, have been moderate republicans their entire lives. Despite them being neverTrumpers, they have never voted for a Democrat in a presidential election. They will this year.

It is all real.

My mom, also a lifelong Republican, said the same thing after seeing kids in cages at the border. Honestly that should have turned all Trump supporters who can still claim they’re human.

Good for your dad. Mine was a lifelong Republican poster boy: Marine, Southerner, white, devout Protestant, CPA. About 2000, he figured out Republicans were no longer conservative, they were just mean. So he hasn’t voted for one since. He’s 82 and will support Biden in November.

My dad is a republican
I am gay
95% of the time if politics comes up we end up yelling at each other.
He’s so disgusted with trump he is either going to not vote at all, or maybe even hold his nose and vote democrat.
I’ve convinced him with the LGBT rights being under assault

But most people seem pretty disgusted with the whole situation and think that there were plenty of other reasons for her dad to have written off Trump and his cronies before:

100% agree. It's extremely painful. It's been a source of constant hostility, and I have felt deeply ashamed that my own father is so far on the opposite side of everything I value and believe in. But, as humans, if we don’t have the capacity to change, what do we have?

Wittels agreed in a series of tweets, saying she hates that her dad supported Trump, but that Fox News is toxic sludge in his brain:

A final note. It's impossible to quantify just how much blame Fox News deserves, but if we're pie-charting it, I'm going with 60 – 85%. My dad has Parkinson's. He sits at home all day and watches toxic, racist, xenophobic propaganda. It’s massively destructive. So: Fuck Fox News.

A lot of liberal people have parents who are not. Many have been sucked into the Trump cult. I’d celebrate anyone who escapes—but I probably wouldn’t want to hang out with this guy once the quarantines are over.