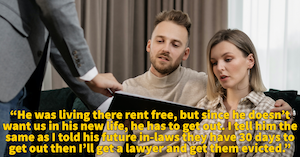 Everyone likes to make fun of how insufferable in-laws can be — and some of them can be pains in the butt. But some are also really kind and supportive. Unfortunately for one Redditor, his son is marrying a girl who has the absolute rudest family — and they have decided that the son’s family cannot come to the wedding because they are “not their kind of people.” The OP didn’t clarify what that meant, but he did decide to kick everyone out of the house he’s been paying for and that his son is living in rent-free.

“My wife and I bought a four bedroom house in PA that my son lives in. Our son went to College in PA and wanted to stay in the area. So we bought the house as a second home, we live in NJ and commute into Manhattan for work. We figured that he would have a place to live and we could visit every so often and spend some quality time together,” the OP writes.

“We pay the taxes and services / maintenance on the house, our son pays for his groceries and the house utilities. All was going well for a few years, our son meets a girl and they get serious. We met her and she seems nice enough. The announce their engagement and she moves into the house with our son.”

“Now for the problem: The wedding!!! We hold a little get to know you BBQ at the PA house, my son and daughter are there, as are our sons fiancé and her parents, and sisters. We all seem to be getting along well, my wife, daughter and the fiancé go into the house along with her mother and sisters and my son.”

“A few minutes later my wife and daughter come out and are really upset. The come over and tell me we’re leaving and driving back to NJ. I try to find out what happened. Once we get back to NJ and they calmed down they tell me that our son and his fiancé along with her family don’t want us at the wedding. According to what I was told ‘We’re not their kind of people.'”

“I was livid, I called my son and asked him WTH this was about. He tells me that her family feel that we are not good enough and will embarrass them at a family wedding and that we are all uninvited from the wedding.”

“I let a week go by to calm myself down and drive back to the PA house, the new future in-laws are in the house along with the fiancé. It appears that they all moved into the house. They ask me why I’m there, I tell them that since we aren’t invited to the wedding, I was coming over to talk to my son. They tell me to leave their house. I lost it, and told them that they had 30 days to get out. Tell my son I’m selling the house and he could find somewhere else to live with all of you. I go to a realtor in town and list the house for sale.”

“They call my son at work and tell him what I said. Apparently they thought that he owned the house. He calls me and asks why I’m selling his house, I tell him I paid for it along with the taxes on it and it is mine. He was living there rent free, but since he doesn’t want us in his new life, he has to get out. I tell him the same as I told his future in-laws they have 30 days to get out then I’ll get a lawyer and get them evicted. Am I the AH for taking a hard stance on this. He is my son but thein-laws seem to take over and we no longer count.”

YIkes. This brings in-law strife to an entirely new level — and Redditors want to know more.

“NTA. And I want an update on this because it sounds nuts. What kind of people do they think you are? How was your son ok with excluding his whole family? Do you think your son’s been brainwashed by his fiancée? How did he think the house was “his” when he didn’t pay the taxes on it? So many questions,” asked

“So many questions but ultimately, being uninvited from the wedding, the in-laws having no idea they own the place, and the very rude behavior? For this instance regardless of the lack of information; it’s NTA,” said

“NTA….you don’t need a lawyer in 30 days, you need one NOW. I am not familiar with PA tenant laws etc but you need to follow everything by the book so that can’t contest anything. I would also go back and video tape, with time stamp, the entire property, inside and out, so they can be held accountable for any damage done,” advised

“NTA for your stance on the in-laws. However with your son I suggest you guys have a conversation see why is willing to cut you out for a new family. I mean it seems like you guys were happy until this relationship started. Don’t destroy your family to one up another. Their daughter will likely stay with her parents. Maybe they are taking advantage of your son and he feels he can’t express it,” said

“Just wanted to also say here that this sounds like an abusive situation. The fiancés family seems controlling and like they are cutting him off from his family. I would be worried if I were the parent,” noted