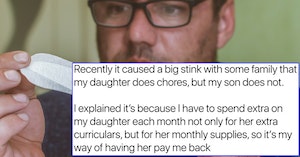 Sometimes there are posts on Reddit’s r/AmItheA–hole, that you just really, really hope they’re completely made up. This one, posted by u/ThrowAwayGirlVsBoy under the title “AITA for expecting my daughter to do chores?” is one of those, and I must say that title is very misleading. It’s written by a 50-year-old man, who says his wife passed away ten years ago, leaving him with two kids. A boy and a girl.

He says his 15-year-old daughter “E” does chores around the house, but the 17-year-old boy “N” does not. His family became aware of the discrepancy, and it caused a “big stink” according to him.

I explained it’s because I have to spend extra on my daughter each month not only for her extracurriculars but for her monthly supplies, so it‘s my way of having her pay me back. She cleans the shared living spaces and bathrooms in our apartment and cooks four meals a week. My brother said I spend twice as much on my son’s extracurriculars and by my logic, he should have to do chores too.

I explained he didn’t because I feel his could help him get into college but hers were just a hobby in my opinion.

E overheard me say this and was very upset. She started refusing to do chores because it isn’t fair. I told her she’d still be doing her chores and life isn’t fair so stop being a brat, or I’d refuse to pay for her extracurricular stuff or pads. I wouldn’t actually do that, but I was mad when I said it.

Well, it was a really ugly thing to say, and I bet he did mean it! His daughter stood up for herself, packing a bag and going to stay with her aunt, who called the dad an “abusive a–hole.”

My brother and sister are coddling her and I’m furious. N said I was being an a–hole to E and that’s why she left. I’m completely fed up with the whole thing. AITA for expecting her to do chores?

He later edited to say that his daughter’s extracurricular activity is being in a dance group and his son’s is playing football and baseball:

So yes I do think my son has a better chance at getting a scholarship. I’m not sexist and I don’t appreciate being called one, and for those of you messaging me saying you hope someone calls CPS on me, I’m not doing anything wrong so that’s just stupid.

Don’t ask if you’re an a–hole if you don’t want an answer, buddy. Because people really thought he was one:

But do we need so many words to say it?

I hope his daughter gets a dance scholarship and away from this guy who has her in indentured servitude over $4 worth of tampons a month. He won’t be getting any visits in the old age home.