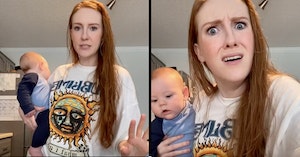 Despite society making strides over the past decades towards gender equality, there are still a number of ingrained expectations when it comes to gender roles. One of the biggest ways that shows through is in how people treat parents — mothers tend to have far more expectations placed on them, while fathers get a whole parade thrown in their honor for simply taking some responsibility for their child.

One TikToker is calling the double standards out, explaining why we need to be more aware of “daddy privilege” and start treating parents equally.

Chloe Sexton (@chloebluffcakes) is a business owner and mother. She often takes her 7-month-old child with her to work and work-related errands because her husband has a job as well.

“My bakery requires that we go buy certain wholesale ingredients at this place called Restaurant Depot every week,” she told viewers. “You’ve seen me do videos of it before where I’m like, wearing [the baby] or I was massively pregnant buying 400 pounds of flour and 100 pounds of butter, and like, that’s a weekly thing.”

She explained that her husband decided to use his day off to do the purchase for her recently, and took their child along with him, as she so often does.

“When I tell you, the way that this man was treated like a hero. A hero. Mind you, those same people see me there every single week,” the TikToker continued. “I’m strapped up with a baby or seven months pregnant, hauling 100-pound bags at a time of flour in the back of my Subaru. Meanwhile, I’m getting a whole lot of ‘Nothing to see here.’ Just a woman doing woman things, busting her ass.”

To no one’s surprise, the reaction to Chloe’s husband working while hauling a baby around was quite different.

“My husband wears the baby and he goes to the Restaurant Depot for mommy’s business and it’s, ‘Oh my god, look at you! Oh my god, you work so hard,’” she recounted.

Her husband had the decency to be embarrassed by the whole situation, but Chloe was pretty annoyed.

“He’s not a hero,” she said. “He’s literally just a father, just a parent, doing the same shit I do every week.”

Viewers were picking up what Chloe was putting down, and shared their own frustrations with the well-documented double standards.

“My husband was seen on ONE aisle alone with our twins and was praised by 5 people,” @abohn002 said. “I shop ALONE [with them] weekly and it’s crickets.”

“Greatness is expected of women but [we] are somehow never appreciated for it,” wrote @meetmallorie.

Chloe told BuzzFeed that her husband was in shock about how he was treated and that having a partner “who doesn’t need to be taught just how deeply unfair the treatment of men vs. women in parenting roles is can be extremely relieving.”

She also suggests that giving praise to parents of any gender who seem to be doing a great job is the best way to handle the situation, rather than just shutting up about dads.

“Every parent deserves to know that they are seen and appreciated,” she said.