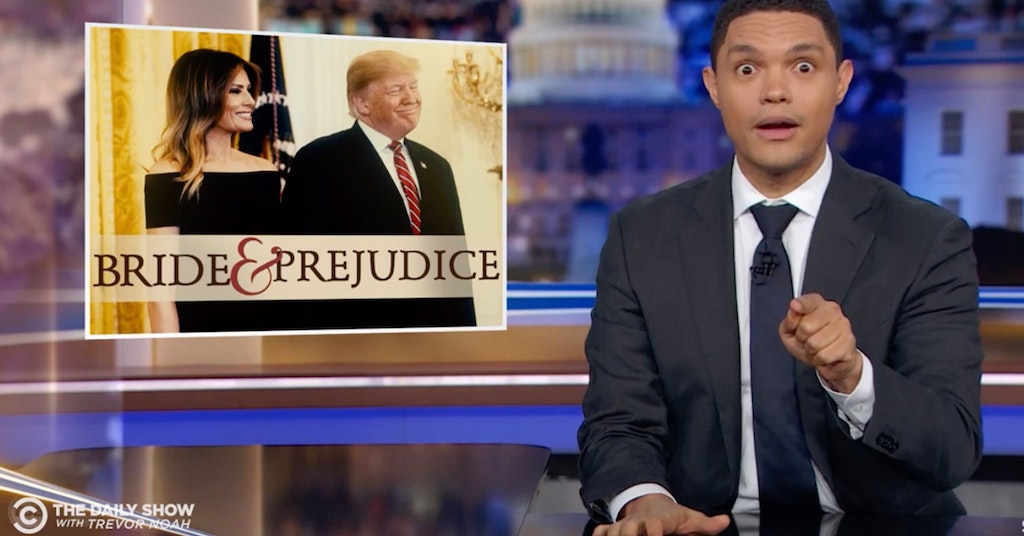 Is Donald Trump trying to get his wife Melania deported? According to The Daily Show host Trevor Noah—very possibly.

In a segment, which aired on Wednesday night, Daily Show host Trevor Noah compared himself to the First Lady before explaining that all evidence points to the President attempting to deport his wife.

Trump’s hardline immigration policies are aimed squarely at his wife. We see you Donald! #DontDeportMelania

“We’re both immigrants,” Noah said of himself and Melania Trump. “Neither of us would be here if it wasn’t for Donald Trump. And, I’m just going to put it out there—we’re both style icons.”

The comedian then explained he has a sneaking suspicion that Trump is “trying to deport” Melania because of their alleged marital problems.

“If you look at Trump’s immigration policies […] a lot of people think that he just hates immigrants. But when you put them all together, you start to notice a pattern. All of his policies seem to be aimed at his wife,” Noah said.

Over the course of the segment, Noah explored stories about Melania’s employment history, her “shady visa history,” and how she got green cards for her parents via “chain migration.”

“As if this wasn’t enough evidence that Donald Trump is trying to deport his wife, then how do you explain the new policy his administration announced this week?” Noah asked, pointing to the policy that would stop immigrants on government assistance from staying in the country.

“Well, guess who lives in a free house provided by the United States? Melania Motherfucking Trump!”

Since #dontdeportMelania is trending: Trump and his Slovene-born escort spent years calling for Obama’s birth certificate. I want to see her legal immigration papers. How the hell did she qualify for an “Einstein” visa reserved for extraordinary ability? Deport Melania already.

Melania realising she may be getting deported, then realising that she gets to leave her oompa loompa husband #DontDeportMelania pic.twitter.com/LWC9uCNjYU

if nothing else, because of this alone 👇😆 pic.twitter.com/mzyEYKly8O

Please #dontdeportmelania who will decorate the White House for Christmas? pic.twitter.com/8fFSvUze1E

Do you think Trump is trying to get his wife deported?