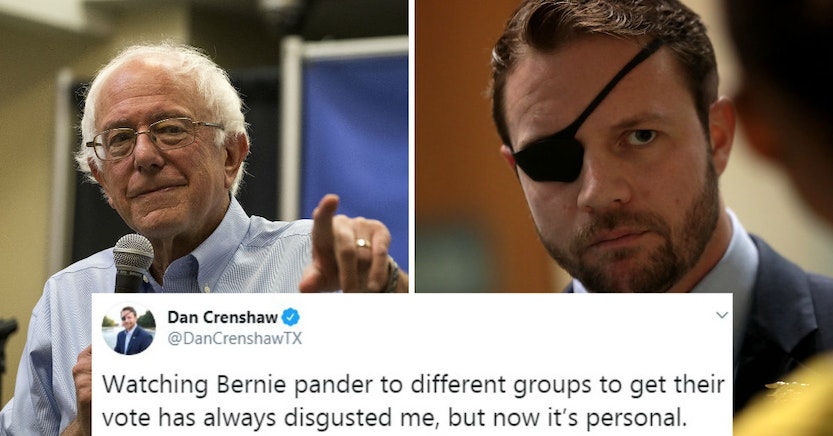 Dan Crenshaw, infamous eye-patched Texas Republican, attacked Bernie Sanders for “pandering” after the Democratic presidential candidate tweeted that countries shouldn’t go to war if they can’t afford to take care of their veterans. Crenshaw, a veteran himself, said that he “didn’t go to war so that you would take care of me, Bernie.”

Watching Bernie pander to different groups to get their vote has always disgusted me, but now it’s personal.

I didn’t go to war so that you would take care of me, Bernie. I went because I wanted to serve and our country needed it. https://t.co/ADhxrvtIA9

That’s really easy to say when you have enough money to take care of yourself no matter what happens to you while other veterans are dying in the streets and dying by suicide because they can’t pay their medical bills.

It’s also interesting that Crenshaw himself has benefited from the very programs that Sanders has fought for. According to an article in the Military Times, the congressman has himself admitted that he “received care at four different VA facilities since his return from the war.”

Crenshaw’s bewildering attack on Sanders comes after a Navy veteran with a terminal genetic disease told the Vermont senator he was considering killing himself over health insurance issues:

Will Goodwin of VoteVets took issue with Crenshaw’s tweet while agreeing with Sanders.

He’s not the only one to take issue.

Way to show those greedy veterans who’s boss, they can come home broken from war and live in squalor like real Americans, thank you for your service admiral dickcheese

Can’t believe the stormtrooper said it would be better for soldiers to die than receive healthcare and thousands of people liked and retweeted. Truly a cursed country.

As a hedge against criticism, and a license to say whatever you want.

#BernieSanders has a well-earned reputation in Vermont for standing up for veterans. He hates war, but loves vets, as opposed to macho loudmouths like you who love war, but kick vets to the curb and let them live on the streets.

Yes, how disgusting for ranking member of Senate Committee on Veterans Affairs, author of many Veterans related bills, to speak on veterans issues. Especially after veterans tell him at town halls they are considering suicide bc of crushing medical debt: https://t.co/lifYMcXyuO

god i hate it when leftists want to help prevent military vets from contemplating suicide over $139,000 hospital bills that the military promised would be paid for https://t.co/qaeAqO3eGy

So I suppose you performed surgery on your own eye or…? 🤔

You do realize Bernie Sanders is on the Senate Committee on Veterans’ Affairs and was the former Chairman.

Its not pandering, its taking care of us veterans.

I’m a veteran and I’ve been begging for services.

You should know this, I visited your office.https://t.co/YXca6rUy6D

Maybe you don’t speak for all veterans, Dan.