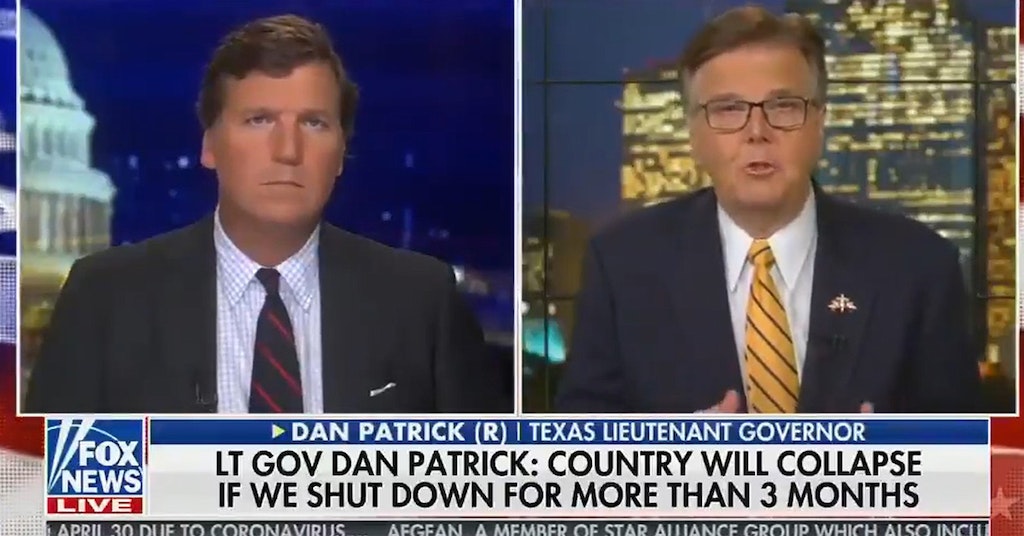 Texas Lt. Gov. Suggests Elderly Are Willing To Die To Save Economy For Grandkids

People haven’t been quarantining for much longer than a week, and the White House is already starting to pressure for things to go back to “normal.” By normal, they mean restarting businesses and allowing people to gather together again so they can keep the stock market going—and infect each other with COVID-19 in the process. Donald Trump has tweeted, “WE CANNOT LET THE CURE BE WORSE THAN THE PROBLEM ITSELF. AT THE END OF THE 15 DAY PERIOD, WE WILL MAKE A DECISION AS TO WHICH WAY WE WANT TO GO!”

This seems to signal plans to lift federal guidelines on social distancing, meaning a lot of people will have to make the choice to return to work on their own.

WE CANNOT LET THE CURE BE WORSE THAN THE PROBLEM ITSELF. AT THE END OF THE 15 DAY PERIOD, WE WILL MAKE A DECISION AS TO WHICH WAY WE WANT TO GO!

There probably are lots of people who would like to return to work, but as many scientists and doctors have pointed out, this will lead to more contaminations and deaths. Trump and his administration seem to be suggesting that a million people dying is worth it if it brings the stock market back up. That will make Trump feel good and also make it more likely he’ll be reelected. Some people suspect that the administration thinks they’ll lose less money by letting people die, and that’s their priority:

Either the Trump admin is genuinely incapable of addressing the pandemic or they performed some kind of profit-loss analysis and determined it's cheaper and easier to let people die so they're looking to hasten the process.

The president’s message has been picked up by his Republican sycophants, like Texas Lt. Gov. Dan Patrick, who has horrified people by appearing on Fox News with Tucker Carlson to suggest older Americans make peace with getting coronavirus and dying to allow younger Americans to keep maintaining the economy.

Texas Lt. Gov. Dan Patrick (R) was just on Fox saying he agrees with Trump. He cast it as an opportunity for seniors to sacrifice in order to keep the country intact for their grandchildren. “Let's get back to living… And those of us that are 70+, we'll take care of ourselves.”

Interestingly, in China people have expressed similar pride in the self-sacrifice they’ve undertaken during the coronavirus pandemic — but that sacrifice was to self-quarantine for weeks, not to return to business as usual.

“Let’s get back to living… And those of us that are 70+, we’ll take care of ourselves,” he said. “I’m going to do everything I can to live. … Our biggest gift we give to our country and our children and our grandchildren is the legacy of our country, and right now, that’s at risk. … I think we can get back to work.”

“What I'm living in fear of is what's happening to this country…‘Are you willing to take a chance on your survival in exchange for keeping the America that all America loves for your children and grandchildren?' And if that's the exchange I'm all in" pic.twitter.com/2vIleMB1jP

“No one reached out to me and said, as a senior citizen, are you willing to take a chance on your survival in exchange for keeping the America that all America loves for your children and grandchildren? And if that’s the exchange, I’m all in.”

“So you’re basically saying that this disease could take your life, but that’s not the scariest thing for you,” said Carlson, asking, “There’s something that would be worse than dying?”

Wow. Okay, so let’s assume that younger people are okay with their grandparents and parents dying so they can work at McDonald’s again. Patrick likely will be fine. He has a prestigious job, can likely make choices about who he comes into contact with, and has health insurance. Guess who doesn’t? A huge portion of American citizens who will be unable to make any decisions about their risk level at all, because they’ll be exposed all over the place.

The argument that the elderly and weak may just have to die to enrich the young and strong — painted as some sort of sacrifice, rather than a horrific outcome that we should fight against — is so bleak and hopeless.

Which stage of capitalism is it where we sacrifice our grandparents for the good of the stock market? https://t.co/vwpn2e47gQ

Nope. You can take away every single thing that I own and cast me out homeless into the street. I would rather keep my son's grandparents alive and healthy. https://t.co/Qka5RGI3ZJ

Ok so the Texas Lt Gov is saying that he and other seniors 65+ would rather expose themselves to the Coronavirus and die instead of support economic bailouts for workers. 😂 https://t.co/VFmOiN2c7Q

Hashtag #NotDying4WallStreet is trending after Texas Lt. Gov. Dan Patrick suggested that grandparents are willing to die to save the economy.

Just when you think GOP could not get any lower. Turns out, there is no bottom to that barrel.

Your grandparents can die to help the economy.

That's it. That's his sales pitch.

Texas Lt Gov Dan Patrick says grandparents would be willing to die to save the economy. Meanwhile rich Republicans aren't even willing to pay their fair share of income taxes.

I love that Republicans have gotten so brazen and sure of their base’s never-ending loyalty that they’ve gone full cult leader.

The President and the Texas Lt Gov looking into the camera and saying:

Wow, Texas Lt Gov Dan Patrick went on TV and said he's 70 but willing to die for the economy. This is lit af. This the tea. This is the new angle on all this. You love to see it. Die for the stocks!

Texas Gov. Greg Abbott: I have found a way to live with the logical fallacy of being both pro-life and pro-@NRA.

At the moment, these deaths still seem hypothetical to a lot of people, though more casualties of COVID-19 are starting to appear, including young people who have died unexpectedly. As the weeks go on, this is all going to start to be much more real.