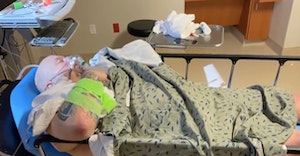 @DavidBegnaud/Twitter via CBS News This Morning

U.S. Army veteran Daniel Wilkinson went to Bellville Medical Center last Saturday in his town of Bellville, Texas, after he began to feel ill. His condition had nothing to do with COVID-19, CBS News reports, but his death did. There were no ICU beds for Wilkinson because they were all filled with coronavirus patients. He died of gallstone pancreatitis, a completely treatable condition under normal circumstances, about a day later.

“He loved his country,” his mother, Michelle Puget, told reporters. “He served two deployments in Afghanistan, came home with a Purple Heart, and it was a gallstone that took him out.”

Wilkinson was treated by ER doctor Hasan Kakli, who recognized the issue he was suffering from as soon as he saw the veteran’s labs.

“I do labs on him, I get labs, and the labs come back, and I’m at the computer, and I have one of those ‘Oh, crap’ moments,” said Dr. Kakli. “If that stone doesn’t spontaneously come out and doesn’t resolve itself, that fluid just builds up, backs up into the liver, backs up into the pancreas, and starts to shut down those organs. His bloodwork even showed that his kidneys were shutting down.”

Kakli ended up calling facility after facility, trying to find an empty bed where Wilkinson could receive care. He even posted on Facebook and was contacted by other doctors, some of whom wanted to admit Wilkinson, but couldn’t get approval because beds were officially full.

For seven hours, Wilkinson waited and Dr. Kakli eventually had to have a discussion with him about how to proceed if things worsened.

“I had that thought in my head: ‘I need to get his mother here right now,'” Kakli said. “I said, ‘If he doesn’t get this procedure done, he is going to die.’ I also had to have the discussion with him. ‘Dan,’ I said, ‘if your heart stops in front of me right here, what do you want me to do? Do you want me to do everything we can to resuscitate you and try and get your heart back? If that were to happen, Dan, if I were to get you back, we’re still in that position we’re in right now.'”

Wilkinson said he wanted to speak to his mother about it. Eventually, a V.A. hospital had a bed available all the way in Houston and he was airlifted there in a helicopter. But it had been too long.

“They weren’t able to do the procedure on him because it had been too long,” his mother said. “They told me that they had seen air pockets in his intestines, which means that they were already starting to die off. They told me that I had to make a decision, and I knew how Danny felt; he didn’t want to be that way. And, so, we were all in agreement that we had to let him go.”

Under ordinary circumstances, the 46-year-old could have been treated by a procedure that takes about 30 minutes and gone home the same day. Kali said he’d never lost a patient to Wilkinson’s diagnosis ever, and he’s afraid of how the lack of ICU beds will lead to more death from treatable conditions.

“We are playing musical chairs, with 100 people and 10 chairs,” he said. “When the music stops, what happens? People from all over the world come to Houston to get medical care and, right now, Houston can’t take care of patients from the next town over. That’s the reality.”