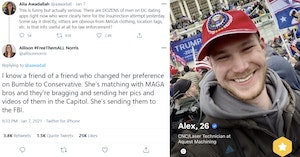 The pro-Trump rioters who stormed the Capitol last week continue to eagerly tell on themselves, including, apparently, to any women who will listen on dating apps as long as they have their political affiliation set to “conservative.” One woman may have now set off an entire trend of heroines who are now pretending to be Trump supporters online to get right-wing men to brag about/confess to their crimes.

The woman’s name is unknown, but she is allegedly connected to one Allison Norris on Twitter, who broadcasted this incredible idea in response to another woman using dating apps to identify the insurrectionists.

“I know a friend of a friend who changed her preference on Bumble to Conservative,” said Norris. “She’s matching with MAGA bros and they’re bragging and sending her pics and videos of them in the Capitol. She’s sending them to the FBI.”

Norris’ tweet soon went viral, with thousands of women vowing to pull the same trick. It was so popular, in fact, that Bumble has apparently disabled their political affiliation filter because people were “misusing” it and also because Bumble is no fun at all.

Even without this feature, efforts to use dating apps to expose insurrectionists continue because these people keep putting photos of themselves at the riots on their profiles. Before Norris’ tweet went viral, political activist Alia Awadallah was calling the FBI because she alone found dozens of rioters on these apps with location tags putting them in Washington D.C. in pro-Trump gear on January 6.

“It’s funny how obvious it is when people aren’t local,” she wrote. “My app went from real estate agents, accountants, and contractors to…none of that.”

There is a long and fascinating history of women in dark times using their sexuality to fight oppressive forces, including during the last time we had a serious problem with actual Nazis. Just about a year ago, the BBC did a short segment on the history of teenage Dutch girls who seduced Nazi soldiers during World War II and lured them out into the woods where resistance fighters were waiting for them.

Thankfully, with the internet and the fact that the pro-Trump rioters are like this, today’s resistance fighters don’t have to go to such extreme measures to fight back.