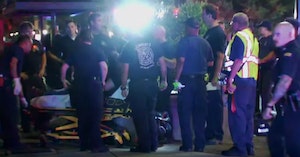 At Least 9 Killed In Dayton, Ohio, In Second Mass Shooting Within 24 Hours

Hours after a deadly mass shooting in El Paso, Texas, another shooter opened fired on a crowd in Dayton, Ohio, killing ten and injuring 27, CNN reports. The shooter also died at the scene. He was found wearing body armor, and carrying a .223 high-capacity gun along with extra magazines.

The shooting began outside of a bar called Ned Peppers on Saturday night, a busy area populated by bars and restaurants. The historical district is the center of night life in Dayton. Officers arrived on the scene very quickly, which Dayton’s Mayor, Nan Whaley, claimed prevented an even higher death count.

Photographer Hannah Ray first heard gunshots while standing outside, on the nightclub’s patio.

We heard gunshots while on the patio.. ran indoors only to be shoved back out because the shots were coming from inside the bar. We ran for our lives and hopped a fence trampling multiple people in the process/hid anywhere we could https://t.co/pm7Q00DfbR

They just shot up ned peppers while I was in line…. police just killed dude 5 feet in front of me… I can’t go out in this city anymore ????

It was at Ned Peppers. I was there, definitely sounded like 2 shooters with handguns just judging by the sound and number of shots fired. Shooter was in the front of the bar, I was in the back. Didn’t see anything, but it was chaos. Pray for those who are injured

The FBI, local and state law enforcement are working together in El Paso and in Dayton, Ohio. Information is rapidly being accumulated in Dayton. Much has already be learned in El Paso. Law enforcement was very rapid in both instances. Updates will be given throughout the day!

But many have pointed out the hypocrisy of Trump’s words. The president has long fostered violence at his campaign rallies and amongst his supporters, especially against immigrants and people of color.

Writer Mikel Jollett pointed out that he laughed at someone suggesting shooting people seeking asylum in the United States:

Trump [Talking about brown families seeking asylum]: How do you stop these people?

30 people have been killed in mass shootings in the US in the last 24 hours alone.https://t.co/T407ylLQrX

There have been reports that the shooter in El Paso was a 21-year-old man who is believed to have written a manifesto of racist, anti-Hispanic sentiments, which he allegedly posted to 8chan with the words, “I’m probably going to die today.”

The document went online about 20 minutes before the shooting began. It is filled with white nationalist ideas about immigrants taking jobs, and his fear that an increasing number of latinos in Texas would make it a “Democratic stronghold.”

On Twitter, the focus is on how white nationalism is on the rise along with domestic terrorism. There are calls for gun control measures and a rejection of the standard offering of “thoughts and prayers.”

The Dayton gunman killed nine people and injured 26 IN LESS THAN ONE MINUTE. #DaytonShooting

We went to sleep mourning over the #ElPasoShooting.

We woke up this morning to the #DaytonShooting.

There are 400 million guns circulating in America, more guns than people.

Do not allow yourself to become desensitized.

Do not let our nation’s leaders convince you that this is inevitable.

Do not allow yourself to believe this is normal. #ElPasoShooting #DaytonShooting

Senator Sherrod Brown appeared on CNN’s State of the Union, saying that not much is publicly known yet about the Dayton shooter, but he does fit the profile according to conversations with Mayor Whaley.

“The mayor said it was—a young white male,” said Brown. “I believe she may have said his age, I believe early 20s but I don’t know for sure. He came not from the city of Dayton, he came from a town in Montgomery County nearby, that is the county Dayton is in and that is all that I know.”