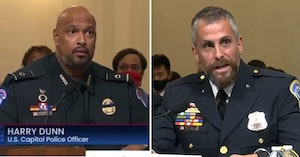 DC Cops Describe Terror And Trauma Endured On January 6: “They Tortured Me”

Today was day one of the hearings scheduled as part of the House select committee investigation into the assault on the Capitol that took place on January 6 by Trump supporters, sent there at the command of the former president himself, that left five dead and many injured. The first up to testify about what happened that day was a line of D.C. police officers who were on duty at the time of the attempted coup and who told some disturbing tales about what they endured from a mob of people they had thought to be on their side.

One of the first up was Officer Michael Fanone, who also may have been on the receiving end of some of the worst violence from the crowd, describing what he went through as torture.

“I was electrocuted again and again and again with a taser. I’m sure I was screaming, but I don’t think I could even hear my own voice,” he told the committee. “They tortured me. They beat me. I was struck with a taser device at the base of my skull numerous times, and they continued to do so until I yelled out that I have kids.”

Fanone suffered a heart attack during the assault, likely as a result of repeated shocks to the base of his skull. He was also diagnosed with a concussion, traumatic brain injury, and PTSD.

Researchers on trauma and PTSD have found that the psychological outcomes following a traumatic event are highly dependent on the amount of support the victim receives, from loved ones as well as from the larger society (especially in the case of high-profile events like this). A lack of support is linked to a higher likelihood of developing PTSD and suffering from more intense symptoms, and unfortunately, a big part of the nation including people in positions of authority are actively gaslighting Fanone and his fellow officers.

“What makes the struggle harder and more painful is to know so many of my fellow citizens, including so many of the people I put my life at risk to defend, are downplaying or outright denying what happened,” he went on. “I feel like I went to hell and back to protect them and the people in this room. But too many are now telling me that hell doesn’t exist or hell actually wasn’t that bad.”

Other D.C. cops made similar reports, including Officer Daniel Hodges, who spoke on the surprising number of Christian symbols and things he thought were pro-police images present in the crowd that attacked him and his colleagues.

“It was clear the terrorists perceived themselves to be Christians,” he said. “I saw the Christian flag directly at my front. Another read ‘Jesus is my savior, Trump is my president.'”

Officer Harry Dunn, meanwhile, reported that the Trump supporters turned on him in the most vicious manner when he told them that he had voted for Biden, discovering that as a Black police officer, their racism was just barely contained until they discovered his unsurprising political leanings.

“I do my best to keep politics out of my job, but in this circumstance, I responded: ‘Well I voted for Joe Biden. Does my vote not count? Am I nobody?'” Dunn testified before letting out an audible sigh. “That prompted a torrent of racial epithets. One woman in a pink MAGA shirt yelled: ‘You hear that guys? This n—-r voted for Joe Biden.’ Then the crowd, perhaps around 20 people, joined in screaming “boo, f—ing n—-r.”

“No one had ever, ever called me a n—-r while wearing the uniform of a Capitol police officer.”

According to Dunn, other Black Capitol officers reported similar incidents of racist abuse from the pro-Trump mob on that day when he asked them about it.

This is just day one and we can only assume it gets worse from here.