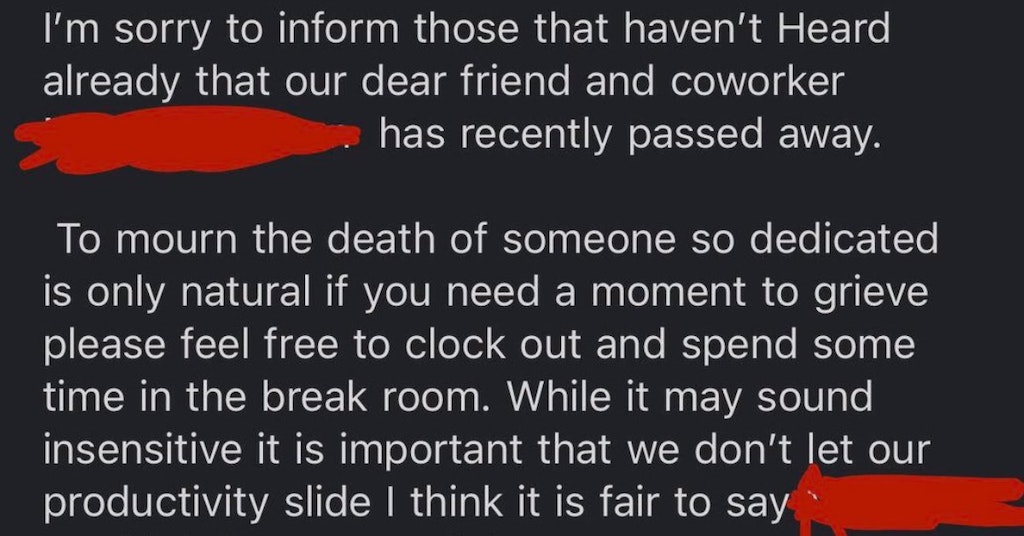 A screenshot of a company email telling employees that they must clock out in order to grieve a coworker who had just died, and only do so when it’s not busy or could get in the way of “productivity,” is dropping jaws during what can easily be described as a new labor movement in the U.S. The email, which has identifying information redacted, announces the death of one of the workers, assures the living that they don’t want to be “insensitive.” But.

“To mourn the death of someone so dedicated is only natural if you need a moment to grieve please feel free to clock out and spend some time in the break room,” it reads. “While it may sound insensitive it is important that we don’t let our productivity slide I think it is fair to say [redacted] wouldn’t have wanted that.”

It does indeed sound insensitive, and only gets worse by restricting the times in which the company’s workers are allowed to grieve while blaming this on their fellow workers.

“And also please do not clock out while the store is busy as this will add undue stress on the team.”

Fun fact: Holding in grief while working during a busy shift because you could be punished for letting your emotions out also adds undue stress on the humans making up “the team.”

The email originally appeared on the Reddit “Antiwork” forum, which had gained massive amounts of attention and new members over recent months as the pandemic widely pushed workers over the edge, leading to massive numbers of people quitting their jobs. Sentiments about work and how workers should be treated seem to have shifted away from assuming that those in low-paying, exploitative jobs are just lazy people who should work harder for better jobs and toward a whole movement for workers’ rights, including a wave of strikes.

This particular example of poor worker treatment quickly spread across social media, with many expressing horror at the fact that the company basically admitted that they care more about “productivity” than the lives of those they employ. The email seems to express multiple times that they know what they’re saying is messed up, not only openly calling it “insensitive” but threatening their workers with termination if they should complain about said insensitivity among each other.

“If there are any issues with this please contact me directly and do not discuss these issues with coworkers as it may cause undue stress. Discussing this may result in immediate dismissal.”

This is far from the only example posted to Antiwork or elsewhere of companies and bosses being utterly horrible following the death of one of their workers, but these practices are not often immortalized in email messages. Amazon has been repeatedly accused of refusing to let employees stop working even when their coworkers collapse and die on-site during their shifts.

Clearly, people are fed up with this treatment.