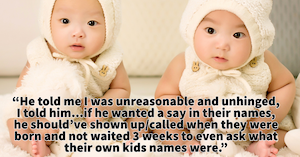 When you abandon your pregnant partner and peace out for the entire birth and beginning of your children’s lives, do you really maintain any say about their names?

One Redditor who experienced such a crappy event in her life went on to give birth and name her twins — both first and last names. She expected her ex-fiancée to cease to be a part of their lives. Three weeks later, though, he turned up — and he was mad the OP had named them without his say. Please, dude, get out of here.

“I (f23) recently had twins about 7 weeks ago. Me and their dad were engaged, planning on getting married, and did plan the pregnancy. He was the one who had really pushed the idea and convinced me, so when he decided to up and leave when I was about 14 weeks pregnant, it sucked. During my pregnancy, we had minimal contact, mainly around custody and the few requests on updates with the pregnancy. Surprisingly, he did fight for custody – to have 0%. He’ll have visitation and parental rights but that’s it,” the OP says.

“The last time we talked before the babies were born, it was 3 days before my c-section. This was planned and he was aware of the date/location etc. The babies were in the NICU for 2 weeks and during this time he didn’t text or visit. Obviously you need to name your kids and so I ended up choosing them myself since we hadn’t gotten to that stage. I also gave them my last name since I’ll be the one to do appointments etc and raising them. From his lack of interest throughout pregnancy, I didn’t think he cared.”

“3 weeks after they were born and I’d taken them home, he rocks up. He asks what I named them and when I tell him, he said they don’t look like their names and the names are ‘stuck up’ names. He then says their names and his last name, but I corrected him and told him they’d taken my surname. He got pissed and it became a tense situation.

He demanded I change their names, I said no. He told me to combine our last names, I said no. I told him a parent that fights for 0% custody of their kids doesn’t show much concern or care about said kid, especially since there are no physical/mental etc reasons to not be able to parent. He told me I was unreasonable and unhinged, I told him that paying child support was the bare minimum and if he wanted a say in their names, he should’ve shown up/called when they were born and not waited 3 weeks to even ask what their own kids names were. AITA?”

No, you are not unreasonable or unhinged!

“NTA. You’re right that normally names are a 2-yes situation, but your case is not normal. Your ex doesn’t get to show up 3 weeks after the birth and start making demands. If I were you I would refer all his calls to your lawyer and don’t even worry about his nonsense. PS. Congratulations on your twins,” said

“OP, I’m concerned that you even have to ask if you’re TA. I mean, I’m concerned you might’ve been mistreated by someone in the past which is how you ended up with such a prince. Please get some therapy if you can, to figure out how you hooked up with this AH and how you can avoid such in the future. And hold the line with this one: don’t give him an INCH, EVER,” advised

“I see so many stories where dad wants zero involvement when the child is born, then when they’re 5-6 out of the tough toddler stage and now they’re a fun kid to take to the aquarium and amusement parks, suddenly they have a change of heart. Make sure everything in nailed down on paper! I would even start a journal documenting every interaction you have with him and keep communication to text and email to keep a paper trail. You never know what kind of BS he’ll pull later,” warned

“NTA, that toxic man is prioritising HIS territory over responsibility. The fact that the first thing he’s concerned about, 3 weeks after their birth, is the name instead of their health/ condition, mother’s recovery or if they have enough help raising the newborn says a lot about him,” said