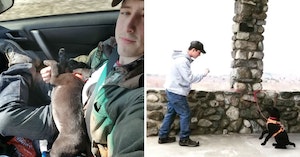 Emerson the black lab mix got a rough start to life, contracting the canine parvovirus as a small puppy and having a number of seizures. While he was recovering, the good people of the canine rescue organization NRF Maine noticed that he couldn’t hear the way he should. Regardless, Emerson was a sweet and adorable pup, and they put him up for adoption once he was healthy.

“Once we got him home from the vet’s office from Florida, we realized he had hearing difficulties,” NRF Maine’s Lindsay Powers told Good Morning America. “He doesn’t let it bother him at all, though he’s a typical puppy.”

Soon, all of Emerson’s siblings were adopted and he was left alone without a family. Not long after Powers shared Emerson’s plight on Facebook, she received an adoption application from Nick, who is also deaf and felt like adopting a deaf puppy would help them form a special bond.

“Right off the bat he said, ‘I’m deaf also and I feel like we’d have a good connection,'” said Powers. She processed the application in a single day.

When Nick and Emerson first met, the two immediately hit it off.

“When Nick and his Mom walked into the house to meet Emerson, Emerson made a direct line for Nick and sat at his feet,” an NRF foster mom wrote in a Facebook post. “That’s all it took. I was sold that this was fate, and these 2 belonged to each other.”

After their fateful meeting, Nick created an Instagram page just for “two deaf boys and their adventures,” which today has over 26,000 followers. Nick was even able to teach Emerson tricks in sign language, including sit, lay down, and come. His mom, Rachel, thinks they are the cutest pair, noting that “Emerson is always finding a way to lean on Nick.”

“If Nick reaches up and shakes his ear lobe, Emerson will bark—it’s so cute,” she said.

“So proud of Emerson and how smart he is!” Nick wrote on one video. “He has done so well learning these tricks. He’s a food-motivated boy.”

Today, Emerson is a year old and loving life with his new family, including his adopted dog brother Scout. Though he’s a big boy now, Emerson still fancies himself a lap dog.