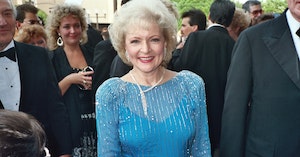 People React To The Death Of Betty White, Incredible Actress And Human Being, At 99

The year 2021 has truly been the beating that keeps on giving, capping things off by taking away actress and coolest old lady ever Betty White on New Year’s Eve at age 99, just 18 days short of her 100th birthday on January 17, 2022. The news was initially reported by TMZ, giving people a bit of hope that it was another hoax, but it was soon confirmed by an article in PEOPLE quoting White’s friend and agent Jeff Witjas as he mourned her passing.

“Even though Betty was about to be 100, I thought she would live forever,” he said. “I will miss her terribly and so will the animal world that she loved so much. I don’t think Betty ever feared passing because she always wanted to be with her most beloved husband Allen Ludden. She believed she would be with him again.”

The news quickly devastated social media, where people had been talking about White reaching the big 100 earlier in the year. White had recently expressed feeling healthy, making her death something of a shock in a nation perpetually in mourning for the hundreds of thousands of COVID-19 victims. Just three days ago, PEOPLE published a cover story about her and her upcoming birthday milestone, which White tweeted about in her final social media post.

“I’m so lucky to be in such good health and feel so good at this age,” she told them. “It’s amazing.”

She also joked that her secret to long life was “I try to avoid anything green.”

White’s loved ones have not yet shared the cause of White’s death, but everyone, fellow celebrities and random nobodies alike, is wishing her eternal peace and a reunion with her late husband.