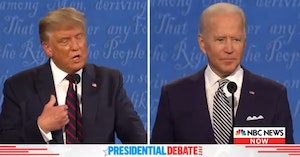 The Commission on Presidential Debates announced Wednesday that they will be changing the rules for these debates after the shameful display on Tuesday in which Donald Trump seemed to spend more time talking out of turn than in. Following the calls by many to allow for candidate microphones to be cut if they break the rules, the commission has reportedly decided to allow for just that, according to a source close to them.

Though the plans have yet to be finalized and officially announced, it’s hard to imagine any better way to force Trump to play by the rules.

After the unprecedented rule-breaking from the president in the first debate, the commission quickly put out a statement saying they would be changing the rules that had worked just fine for so long in the many, many years of U.S. politics before he came along.

“Last night’s debate made clear that additional structure should be added to the format of the remaining debates to ensure a more orderly discussion of the issues,” the statement reads. “The CPD will be carefully considering the changes that it will adopt and will announce those measures shortly.”

They also thanked Chris Wallace for his “professionalism and skill” in attempting to contain Trump and create a fair debate, but clearly, some more extreme measures are needed.

The Trump campaign, of course, is upset that their candidate will be forced to follow the same rules as everyone else for once, claiming that the commission supports Joe Biden.

“President Trump was the dominant force and now Joe Biden is trying to work the refs,” said Trump campaign communications director Tim Murtaugh. “They shouldn’t be moving the goalposts and changing the rules in the middle of the game.”

Biden’s campaign, meanwhile, simply emphasized that the former vice president will be willing to follow whatever rules are set.

“He’ll be focused on answering questions from the voters there, under whatever set of rules the Commission develops to try to contain Donald Trump’s behavior,” said deputy campaign manager Kate Bedingfield. “The president will have to choose between responding to voters about questions for which he has offered no answers in this campaign — or repeating last night’s unhinged meltdown.”

Trump critics are predictably relieved to hear that the next debate, to be held on October 15, might not be a complete circus, though some are predicting that there won’t be a next debate.

Others, however, have different ideas for how moderators could handle rule-breakers.