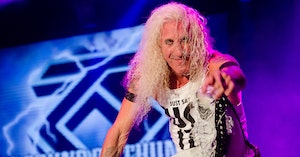 Dee Snider has repeatedly made it clear that his music isn’t for Trump supporters, and he’s not letting up any time soon.

Many, many times since the Trump era began, rightwing extremists have attempted to co-opt Twisted Sister’s iconic “We’re Not Gonna Take It” for their own use, out of context of the remainder of the group’s music and individual actions. Donald Trump himself even used the song at a rally at one point, and other conservative politicians have continued to do so.

And Snider has called them out time and time again.

Last month, he publicly blasted Republican candidate for governor of Arizona, Kari Lake, for tweeting out the anti-authority lyrics, claiming she and her ilk completely misunderstand the song.

“It was NEVER intended for you fascist morons!” the singer wrote.

Most recently, he took a broader stance, addressing “QANON, MAGAT FASCISTS” with a declaration that they’re actually the exact type of people who inspired the song in the first place.

Every time this happens, conservatives inevitably hit back with claims that they are fighting the good fight against an oppressive government and that Snider is, in fact, the one stumping for the system he used to rail against.

Weirdly enough, that argument coming from the party fighting to ban LGBTQ+ books and lessons acknowledging the existence of racism in public schools, pushing for Christianity to be forced on everyone by the government, and that tried to overthrow the results of a political election isn’t exactly winning people over.

Will this stop rightwingers from using his song? Probably not. And it seems safe to say Snider will keep on telling them exactly how he really feels.