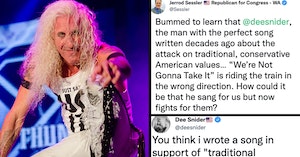 Dee Snider Scoffs At Republican Who Claimed Twisted Sister Song Was About ‘The Attack On Traditional, Conservative American Values’

A Republican running for Congress had an embarrassing awakening over the weekend after he reminded everyone what a delusional world people like him live in.

Jerrod Sessler, a former NASCAR driver who is taking a swing at joining the House of Representatives on behalf of the Washington GOP, expressed his disappointment last week that Twisted Sister’s Dee Snider seemed to have become liberal over the years.

“Bummed to learn that @deesnider, the man with the perfect song written decades ago about the attack on traditional, conservative American values… ‘We’re Not Gonna Take It’ is riding the train in the wrong direction,” he wrote. “How could it be that he sang for us but now fights for them?”

On the one hand, the pre-social media era meant not necessarily knowing celebrities’ opinions on every single thing that came up in life.

On the other, you don’t have to have a deep knowledge of Twisted Sister or Dee Snider to take a guess at whether he’s a “traditional, conservative American values” kind of guy.

And Snider made it very clear during the Trump era that he doesn’t exactly support Republicans or their interest in his music.

But his music was never, as Sessler said, something he sang for conservatives. And he had no qualms pointing that out again now.

Sessler tried to save face, but it didn’t really do the trick.

Media that conservatives misinterpret to be in support of them when it is actually against them could be an entire genre in and of itself.

This seems to be particularly true when it comes to songs and stories about oppression, as they love pretending to be the most oppressed people in the United States. So with that in mind, it’s easy to see how they decided to co-opt “We’re Not Gonna Take It,” but rewriting history to pretend Snider is one of them just isn’t it.