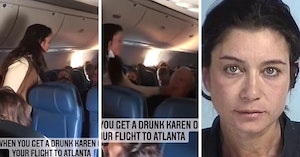 Planes continue to be ripe ground for freakouts in the time of coronavirus, as yet another mask altercation in mid-air has gone viral.

This one’s a little different than usual. A woman was recorded screaming at an older man to “put your f—king mask on” while on a Delta flight from Tampa to Atlanta two days before Christmas.

The man was seated and eating at the time, whereas the woman, later identified as Patricia Cornwall, was moving around the cabin, maskless herself.

The two continued going back and forth, with Cornwall telling the man to “stand your ass up” as if she was gearing up to fight him.

“Sit down, Karen!” he yelled back.

As crew members got involved, threatening to call the police to meet Cornwall when the flight landed, things only got more heated. She again demanded he mask up, he replied by calling her a b*tch, and Cornwall punched the man in the face.

“As soon as we get to Atlanta, you’re going to jail,” he told her, even as a crew member tried to hold her back from hitting him again. She instead opted for spitting on him.

Cornwall was handed over to police when the flight landed and is facing federal charges of assault. And the investigation has already uncovered that although she focused on masking in the part of the incident that was recorded, it actually started over something else entirely.

According to the criminal complaint, Cornwall found the path back to her seat blocked when she was returning from the plane’s lavatory. The flight attendant asked her to take another seat while beverage service continued, at which point she allegedly responded “What am I, Rosa Parks?”

The man was nearby and says that he “told Cornwall it was an inappropriate comment and that she ‘isn’t black…this isn’t Alabama and this isn’t a bus.’”

Things escalated from there, leading to the events captured on video by another passenger.

To add an even further twist to the tale, Cornwall was ultimately identified as a bit-part actress named Patty Breton. She had a one-off role in Baywatch as well as Married… with Children, and was also a Raiders cheerleader when the team was based out of Los Angeles.

Delta banned her from their airline after the altercation, and while she is being allowed to return to California while out on bond, one of the terms is that she not travel on plane, bus, or train once she gets there.