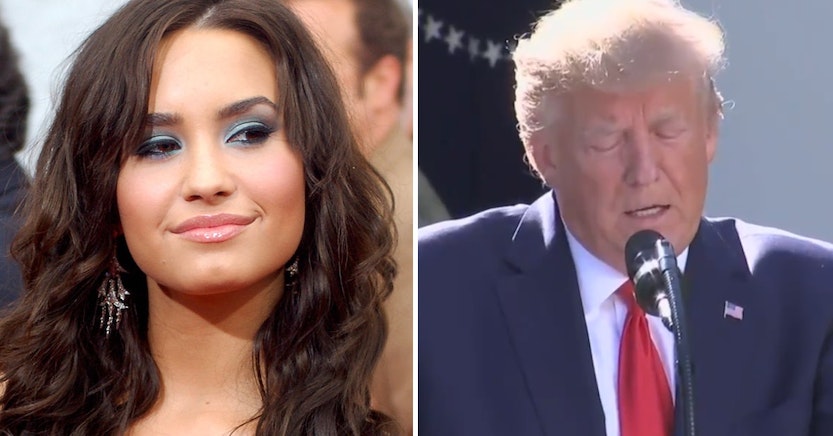 Singer Demi Lovato just dropped a new song directly addressing Donald Trump and attacking his response to both the pandemic and the national uprisings against police brutality.

The track, titled “Commander in Chief,” asks the president a number of poignant questions, with the final one punctuating the chorus — “How does it feel to still be able to breathe?”

The song lambasts Trump for his constant lying and accuses him of “shutting down systems for personal gain.” The lines about being able to breathe and about people dying seem to be about the COVID-19 crisis, which has now claimed over 220,000 lives in the U.S.

“If I did the things you do, I couldn’t sleep / Seriously, do you even know the truth? / We’re in a state of crisis, people are dying / While you line your pockets deep.”

Speaking with CNN about the track, Lovato expressed that she had frequently wanted to ask Trump some of the questions posed in the song, but realized there was a much better way to do so than sitting down with him personally.

“There’s been so many times that I’ve wanted to write the President a letter or sit down with him and ask him these questions,” she said. “And then I thought, I don’t really actually want to do that and I thought one way that I could do that is writing a song and releasing it for the whole world to hear and then he has to answer those questions to everyone and not just me.”

After the first singing of the chorus, Lovato goes on to address the Black Lives Matter uprisings across the nation, promising that “we’ll be in the streets while you’re bunkering down.” This would appear to be a reference to the time Trump hid in the White House bunker while D.C. protesters were met with lines of Secret Service agents and, of course, tear gas.

She also vows that “we’ll still take a knee,” referencing Colin Kaepernick’s famous protest action during the national anthem at an NFL game.

Lovato will perform the song, co-written with Finneas, Julia Michaels and Justin Tranter, for the first time tonight at the Billboard Music Awards.

The singer also expressed that another reason for making the track was to help engage her fans in politics and encourage them to vote, regardless of their political affiliation. She is also not afraid of return fire from Trump himself, which will very likely happen.

“Bring it on,” she said on the idea of Trump tweeting about her. “Prove to them you’re exactly who I said you are in the song. Just do it, go for it.”

Although some of Lovato’s fans will inevitably gripe about her daring to have political opinions, many others are absolutely loving it.