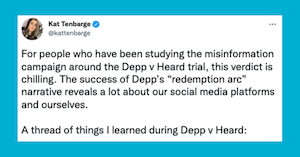 For those of us keeping track of the Johnny Depp and Amber Heard defamation trial — and those of us dismayed by the verdict — the fallout has been disturbing. Yesterday, both Heard and Depp were found liable for defamation, but the jury awarded significantly more damages to Depp.

Far from over, this case has shown us what exactly a backlash looks like in action — and social media users were there to examine what the verdict means for our society in a larger way.

Twitter user Kat Tenbarge created a viral thread explaining how a misinformation campaign led by Depp and his team successfully influenced the climate on social media — and opinions.

“For people who have been studying the misinformation campaign around the Depp v Heard trial, this verdict is chilling. The success of Depp’s ‘redemption arc’ narrative reveals a lot about our social media platforms and ourselves,” wrote Tenbarge.

She focused on media literacy issues, explaining how money played a large role in the campaign. DID YOU EVEN WATCH THE TRIAL, BRO? No, you watched a TikTok about it.

“Media literacy around this trial was abhorrent,” writes Tenbarge. “Most people, even if they say they did, DID NOT watch the trial. They watched TikToks and YouTube videos, most of which were biased for a clear economic purpose. That’s not the same thing.”

She noted that posting from a “pro-Amber or even neutral position” will cause you to lose followers (or experience a barrage of harassment, as many social media users can attest to). She says that since there’s no incentive to consider “both side” Amber’s story and the mountain of evidence she has has been ignored.

Tenbarge also noted that the very platforms people consume can affect our emotional reactions: “We’ve known for awhile that social media incentivizes bad behavior because it fuels engagement. It also incentivizes conspiracy theories, groupthink, cruelty, and harassment. This case exemplifies all of that.”

“When people cherrypick from Amber’s testimony, hyper fixate on her emotions and ‘body language,’ lie about her, and make fun of her, they feed into this culture that hurts ALL victims,” Tenbarge said.

Tenbarge ended her thread referencing another woman who was mocked and abused: Britney Spears: “As many people have pointed out, there will likely be a future redemption arc for Amber Heard, like there was for Britney Spears.”

Hopefully, it won’t take as long. Because what have we learned from our past treatment of women in the media? Apparently nothing.