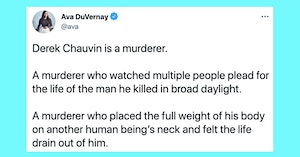 19 Reactions To Derek Chauvin Getting 22.5 Years In Prison For The Murder Of George Floyd

On Friday, former Minneapolis police officer Derek Chauvin was sentenced for the murder of George Floyd, who died after Chauvin kneeled on his neck for over eight minutes as he pleaded for his life. Floyd’s murder sparked protests all over the country and even the world. Many were shocked to hear that Chauvin’s sentence was for only 22.5 years, though THR reports that prosecutors had requested 30.

It’s possible that with good behavior, 45-year-old Chauvin could be paroled in just 15 years, though he was found guilty of second-degree unintentional murder, third-degree murder and second-degree manslaughter in April.

The response online was largely of disappointment, as many felt the sentence was far too lenient, comparing the age at which Chauvin will be released to the fact that Floyd will never be able to enjoy another day again.

Here are some other reactions to the sentencing from celebrities invested in the case: