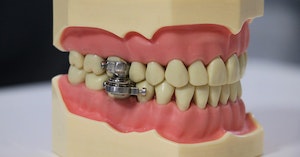 Photo via @otago/Twitter, University of Otago

Researchers at New Zealand’s University of Otago recently revealed a new device ostensibly for the purpose of “weight loss” that has sparked controversy among the public for its resemblance to some kind of futuristic torture device that might be the opposite of what we call “healthy.” The device consists of a magnetic lock that is fitted to an individual’s top and bottom molars and only allows the wearer to open their jaw enough to allow liquids through, forcing them to adopt a liquid diet.

The health benefits of liquid diets have been a subject of fierce debate. The one effect they seem to have consistently is to result in weight loss, but the loss of weight in and of itself, especially at a rapid pace, can be as dangerous and unhealthy as certain industries would like us all to believe that weight gain is.

The backlash against this device, particularly among advocates for the idea of “health at every size,” was swift and severe. It probably doesn’t help that the image is a little bit horrifying in spite of the University of Otago’s efforts to explain that the device can be disengaged in the case of an emergency. Lead researcher Professor Paul Brunton claimed that there are “no adverse consequences with this device,” but may not have been thinking about social consequences.

“It allows the wearer to open their mouths only about 2mm, restricting them to a liquid diet, but it allows free speech and doesn’t restrict breathing,” said the press release from the university. “Participants in a Dunedin-based trial lost an average of 6.36kg [about 14 pounds] in two weeks and were motivated to continue with their weight loss journey.”

The university posted follow-up tweets in response to many concerns that this device could be used for unintended purposes. Worried Twitter users pointed out the rampant problem with eating disorders around the world as thinness continues to be held up as an ideal that goes far beyond health but that has been increasingly found to not be the automatic healthy state it has been assumed to be.

“You don’t need this torture device to go on a liquid diet. I did slimfast in the 90s and lost a tonne of weight quickly,” said one commenter. “I also started vomiting, taking laxatives and exercising obsessively. I put all the weight back on when I gave that up, but the damage it did is still with me.”

Fatphobia is a common problem in New Zealand, the U.S. and similar countries where people are routinely discriminated against at work, at the doctor, and in their everyday lives for being viewed as “overweight.” A massive multi-billion dollar diet industry has pushed studies claiming that being “fat” as they define it is unhealthy as well as a false narrative that fat people create a unique drain on healthcare systems. More recent, independent studies have found that being in the range considered “overweight” can actually protect people from a variety of common health issues.

The rampant idea that being fat is automatically unhealthy has led to a widespread problem in said healthcare systems in which people labeled as “overweight” are routinely denied care until they lose weight, regardless of whether the problem is related to weight, which is sometimes impossible for people without taking drastic measures. Enter the teeth magnet.

“To clarify, the intention of the device is not intended as a quick or long-term weight-loss tool; rather it is aimed to assist people who need to undergo surgery and who cannot have the surgery until they have lost weight,” wrote the University of Otago. “After two or three weeks they can have the magnets disengaged and device removed. They could then have a period with a less restricted diet and then go back into treatment. This would allow for a phased approach to weight loss supported by advice from a dietician.”

This explanation was not satisfactory for many people who feel that forcing people to lose weight to have life-saving surgery is perhaps not good and who are concerned that the device could be pushed on people who don’t need it by any stretch of the imagination.