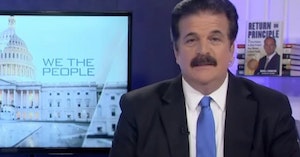 A popular anti-vaxxer radio host had a change of heart, urging his friends to get vaccinated against COVID-19 shortly before he died from complications from the virus.

In addition to being vocally opposed to vaccinating, Dick Farrel referred to COVID as a “scam demic,” mocked Dr. Anthony Fauci as a “power-tripping lying freak,” and spent time this year circulating false conspiracy theories about the election — he was, of course, a big supporter of Donald Trump.

But after coming down with COVID himself and being hospitalized, Farrel came to realize that the virus he told people was a scam was actually incredibly serious. Only, it was too late.

“COVID took one of my best friends!” Farrel’s friend, Amy Leigh Hair, wrote on Facebook after his death. “RIP Dick Farrel. He is the reason I took the shot. He texted me and told me to ‘Get it!’ He told me this virus is no joke and he said, ‘I wish I had gotten it!’”

While the Delta variant and the large percentage of people in the United States who are still unvaccinated is raising the number of new cases among those vaccinated, the people who have refused the shot are still at the highest risk of getting COVID, as well as having to be hospitalized or even dying from it.

But numbers and facts haven’t stopped skeptics from continuing to claim COVID is a hoax and that the vaccine is more dangerous than the virus itself.

Similar sentiments were grabbed from Farrel’s Facebook before it was made private.

And after a year and a half of struggling with people like Farrel and Apley who not only didn’t take the pandemic seriously, but used their platforms to actively encourage people to do things that exacerbated it and put others at risk, little sympathy has been found upon their deaths.