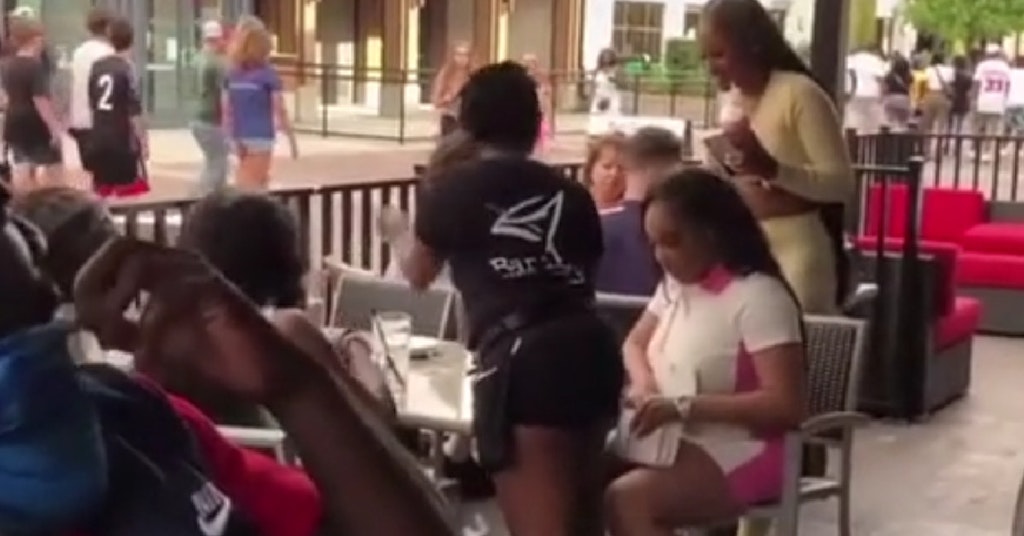 A viral video on Reddit’s “Public Freakout” forum is yet another showing how karma will come for you if you’re not careful, depicting a group of women who were accused of running out on their restaurant bill coming back because they forgot their keys. They then had to shamefully sit back down at their table as the waitress passed each of them their bills while nearby paying patrons filmed and laughed at them.

The video starts as the four women appear to casually stroll back to their table from outside of the outdoor seating area, having apparently claimed to have gone to the bathroom all at once, looking for the keys before their waitress spots them and asks them if they’re “ready” to pay. Well played by someone who is probably a wait staff veteran and has dealt with dine-and-dashers before.

As the four approach the table, people can be heard laughing at them already.

“Y’all went to the bathroom?” someone says.

As they appear to be unable to find the keys and are approached by the waitress, the laughter increases while they reluctantly sit back down to get their individual bills. One of them finally seems to notice the heckling from the nearby table and objects to being filmed.

“Not y’all recording?” she says.

“Y’all shouldn’t have walked out! Pay your bills!” someone from the heckling table shouts back.

People running out on their bills is not an uncommon problem faced by restaurants, but it’s often the wait staff who are penalized for it. Not only do dashers tend to tip quite poorly, many a current or former server has a story of getting the cost of a stolen meal taken out of their paycheck as though they should be responsible for security in addition to everything else they have to do.

Plenty of Reddit users had stories like this to tell in the comments, where little to no sympathy for the women can be found.

“I waited tables years ago and when people ran out on the bill, I had the bill deducted from my pay… as if I am some kind of bouncer or mind reader,” said one commenter. “I was extremely poor and forced to pay for people’s meal out when I couldn’t even eat out myself. People who dine and dash are human garbage.”

Others pointed out that it seems unlikely the women would have been unable to pay considering the fact that they appear to be wearing some designer clothes, or at least fairly high quality knockoffs.

“I just wanna mention too that the one in the yellow is wearing $600 designer shoes but they can’t pay a little $50 each restaurant bill,” noted another Redditor.

The original TikTok video now has over 3.7 million views along with the 105,000 upvotes on Reddit. Commenters on TikTok are no more sympathetic to the women, joining in on laughing at their failure.

“I just know they embarrassed and I would have joined in on the clowning,” said caishab94.