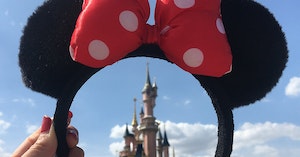 The happiest place on earth is grappling with the fact that the earth it’s on is in the grip of a pandemic. Like most businesses, Disney had to close its castle. They recently revealed tentative plans to reopen in phases beginning at the end of May. On their website, they listed new precautions they’ll be taking to try and prevent the spread of a deadly disease in their facilities. Those precautions include:

Temperature screenings prior to entry

Face coverings required for Guests ages 3 and up

An increased focus on disinfecting and sanitation, including the addition of hand-washing stations and hand sanitizers in key areas

None of this seems too crazy, considering the state of public health in the U.S. at the moment. No company wants a massive COVID-19 outbreak traced back to them. But some Disney fans definitely do not want reality intruding on their experience.

Twitter user @sincerely__ivy screenshot some of the comments on the Disney parks blog, and people are absolutely losing their minds over being told to wear a mask.

The amount of carnage that went down in Disney parks blog: I am literally at a lost for words. pic.twitter.com/bfacQqVUP1

These are just a fraction of all the comments responding to basic safety measures, and it’s pretty sad and scary that so many of these folks are willing to risk their own and their family’s health just to eat a $12 ice cream shaped like a mouse. Not to mention the workers at Disney parks. Just kidding, they obviously don’t care about workers!

“The mask seems to be coming more of a badge of honor and a feel good thing to do than a medical necessity.” 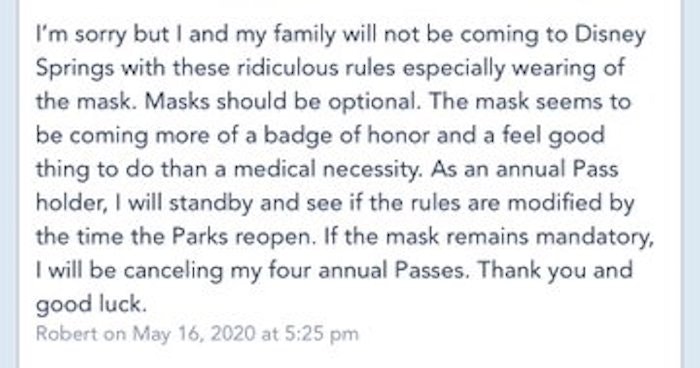 “My body my decision isn’t that the liberal way?!?”

“Not all day long. Just not good for you.”

“Face masks? The science is dubious.” 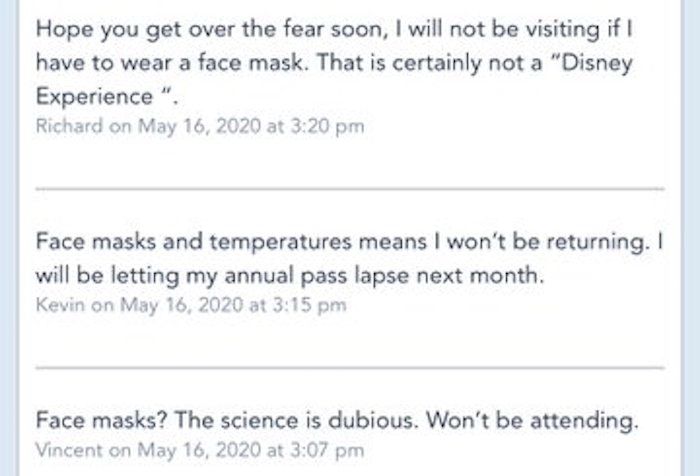 People are horrified by the response, but also considering booking a trip to Disney since it seems like the people who won’t wear masks also won’t be there. Win-win.

"You're going to lose a ton of business!" Like with Costco and Starbucks, these people always imagine a massive army exists that thinks the way they do. And that they'll bring a huge corporation to its knees. Mainly by tweet.

The very same people who scream DONT LIKE IT DONT GO

Or the masked characters they are paying to see?

As an OR nurse I now wear an N95 literally all day even between cases because of these attitudes. Uncomfortable, yes but not unhealthy

My daughter (with autism) is wearing hers every time she goes out. Even remembered her gloves and mask when she went out with her personal support worker. Sometimes we don’t give our kids enough credit or expect enough out of them. Trust me for Dland she would wear it for weeks!

Disney who doesn't own WWE because they don't want it.

Are going to suffer because Karen and Billy Bob wont visit the park after having already paid.

Personally, I won’t go to Disney until there’s a vaccine or until they hire me to play Belle. In a mask.