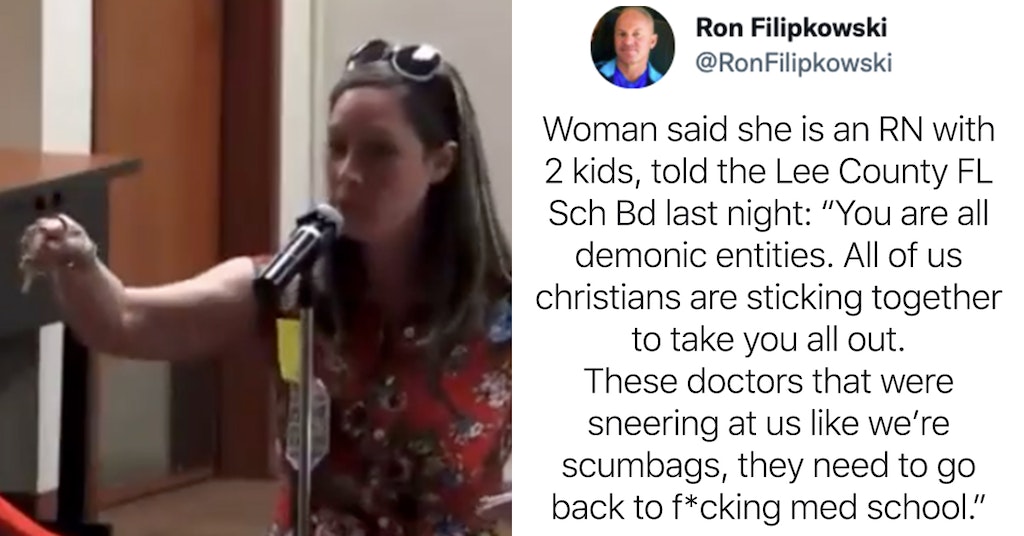 Another religious extremist against science went viral after taking the mic at a recent school board meeting, this time in Lee County, Florida.

The woman, who said her name is Melissa and that she has two children in the district, immediately jumped right into threatening and berating the school board during a meeting in which a temporary 30-day mask mandate was announced.

“All the police officers that kick us out for our first amendment right will also be going down with them. Do you understand?”

‘Disturbed Melissa’ then claimed that she’s been a nurse dealing with infectious diseases for 13 years and that “masks don’t work.”

“These doctors that sit up here, that were sneering at us and looking at us like we’re scumbags? They need to go back to f—king medical school,” she said.

She was given a warning for being “out of order” and her mic was briefly cut before she was allowed to continue: “They need to remember natural immunity is best. You are all demonic entities. You are going to be taken down.”

At that point, Melissa’s mic was cut for real and she was escorted from the podium still shouting.

Video after video of anti-maskers and anti-vaxxers speaking nonsense at these school board meetings have gone viral, as frustrations with them and the damage they’re causing only continue to grow throughout the country.

But Melissa’s religious views brought things to an extreme many of the others haven’t, yet again revealing the deeper problems surrounding Christian entitlement the U.S. refuses to grapple with.

As journalist Matthew Sheffield points out in a Twitter thread about the incident, these people have always been lurking in the background of the GOP, but Trump’s election to the presidency gave them a voice in the party they didn’t have before.

What it will take to spur those in power into action against the way these extremists’ beliefs keep negatively impacting other Americans, it’s hard to say, considering we’ve let them do everything from take out religious exemptions against COVID safety protocols to stripping away women’s rights. But until we figure that out, we’ll just get more Melissas, screaming into microphones about how everyone who disagrees with her is a pawn of the devil himself. And apparently, that’s just fine.