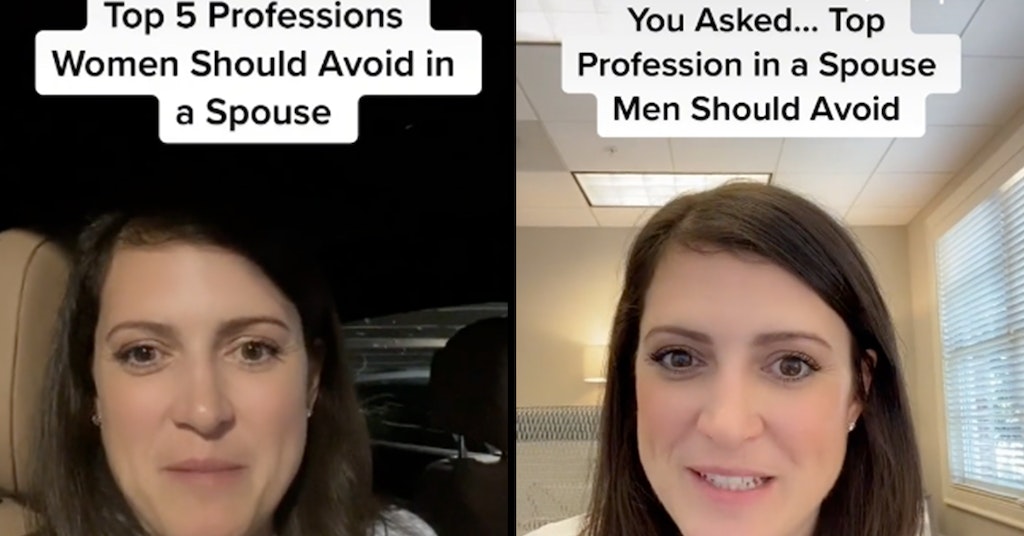 Divorce Attorney Spills On What Professions To Avoid In Potential Spouses

A divorce attorney is offering up some helpful advice for straight people thinking about getting married one day — namely, what professions they should avoid in a spouse.

@jettiegirl28 shared that when she first started practicing family law, another attorney gave her some statistics regarding the top five professions of men that women should avoid marrying. Although she didn’t think much of it at the time, over the course of 13 years on the job, she says she came to notice men in those professions were, in fact, the people who were the most difficult to deal with in divorce negotiations.

So what are the professions to avoid in men?

Her theory is that having so much control and forced respect in their jobs can make it difficult to come home and have to compromise or accept responsibilities as an equal rather than continue to be the top of the food chain.

But as the TikToker has a list of what professions men causing the most problems in divorce proceedings hold, she has a similar list of women.

In a follow-up video, @jettiegirl28 said that she went back through her case list trying to determine which female clients had been the most difficult — and found something very different.

“The most common profession that I see in the female parties in my divorces, and this is over 13 years of cases, is…stay-at-home mom,” she said, acknowledging that it would undoubtedly be a controversial answer.

“When you’re divorcing a stay-at-home mom, they are paralyzed with fear, and rightfully so, because their whole life is going to change. They are going to have to go back to the workforce, they’re going to have to possibly move, their finances are about to be very different, there’s lots of things they don’t know, financially, about what’s going on, so they tend to stick their head in the sand and stall,” she further explained. “And so the cases become very contested and very expensive.”

Of course, there’s no one-size-fits-all answer to marriage, and some relationships with people in all of these careers can work out just swimmingly. It’s about understand unique challenges and working towards compromise with that in mind.

Or, just take the advice of one viewer, who says, “I think the real answer is don’t get married.”