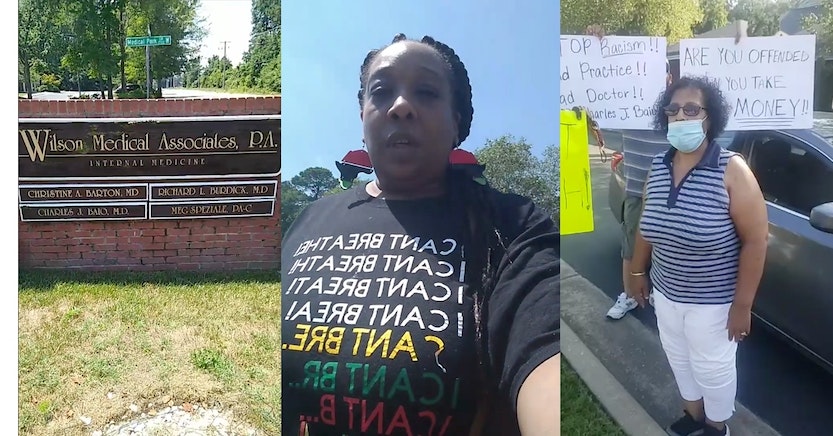 A Black woman says she was kicked out of a doctor’s office over her “I Can’t Breathe” shirt, and now people are review bombing the practice in question in return.

“I am shocked and appalled at what’s going on right now,” she says at the start. “My hands are shaking because I am very pissed.”

Williams goes on to say that she was sitting through the appointment with her grandmother and discussing her care with the doctor, who she identified as Dr. Charles J. Baio, when he asked her to step out to talk to him privately for a moment.

“He pulls me out of the office and tells me I have to leave his facility because my shirt is insulting,” she says. “I was just sitting there, talking about my grandmother’s care, and I was asked to leave because of the shirt that I’m wearing. This is blatant racism.”

“I can’t breathe” is, of course, a reference to a number of Black people who have died in police custody after saying those words. It’s a phrase that has become heavily associated with the Black Lives Matter movement, and the call for police reform and putting an end to racial injustice.

“How is this insulting unless you agree with what happened to George Floyd?” Williams asks.

A series of follow up posts show a small protest outside of the medical office, with people carrying signs and attempting to get in contact with Baio.

One of the later videos also features an interview with Williams’s aunt, who says she was present for the appointment and backs up her niece’s version of events.

The incident allegedly happened on July 15, but has become more widely publicized recently after being shared by prominent figures such as entertainment blogger Perez Hilton.

People from across the world began review bombing the practice with one-star reviews on both Google and Yelp, citing racism and sub-standard service, though the Yelp page seems to have pulled most of the reviews at this point.