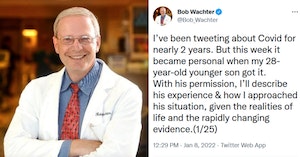 The Chief of Medicine from the University of California, San Francisco’s medical school has been tweeting about the novel coronavirus causing COVID-19 for two years now, taking a calm and data-driven approach to the information he releases to the public, even on his personal Twitter account. However, when his son tested positive for the illness, he found himself in conflict as his love and concern for his child battled against his even-keeled nature, unable to find comfort in the knowledge of just how unlikely it was for his son to be killed by the virus.

He wrote about this experience in an extensive Twitter thread, expressing the fact that even when chances of death or disability from long haul COVID are low, the anxiety that patients and their families feel is real and is part of what makes this pandemic such a living nightmare.

With his son’s permission, Dr. Bob Wachter told the story of how the 28-year-old likely caught COVID from a friend when they met up to watch a movie together even though both were vaccinated and had taken measures to limit the potential for exposure. His son, who he describes as “overweight,” is somewhat at risk for severe illness and death, but still much less so than his father, who is 64.

Wachter broke down the basic math he used to determine his son’s risk and plan out a potential course of treatment.

“He called in sick to work, set himself up for at least 5d of strict isolation, & I set out to figure out his prognosis & if treatment was merited,” he wrote on Twitter. “I knew, deep down, that odds of a bad case were low. But when it’s your kid, you freak out a bit.”

“Re: prognosis, youth helps: compared to his 64 yo dad, he has 1/4 the hospitalization risk, & 1/25th the death risk. An on-line risk calculator (riskcalc.org) (which doesn’t consider vax or Omicron but does consider age & risk factors) calculated risk of hospitalization at 2.3%. I figured that his 3x vax cuts that by ~80%, & Omicron’s “mildness” by another ~50%. So maybe a one-in-300 chance (~0.3%) of needing hospitalization.”

Wachter considered a variety of options to recommend to his son, dismissing most due to short supply or because they had been found not to work well on the new Omicron variant of the virus, which is now overwhelmingly dominant in the U.S. The only option that was readily available would only reduce his chances of hospitalization by a small amount — probably not worth the effort.

Even after determining that his son’s risk of hospitalization was only 0.3 percent and risk of death about one in 5,000, Wachter found that he was still worried about him, as any parent would be. It’s always different when you can see the human face behind the statistic, rending dismissals like “COVID mostly kills people with comorbidities” meaningless to the loved ones of those who have them.

Wachter concluded his thread by thanking God for vaccines (you’re welcome) and listing other points that can be learned, including that Omicron really is that contagious, false negatives with rapid tests definitely happen, and that until (or unless) this surge passes, it’s best to err on the side of caution.

“My son should do OK, but the illness & the anxiety it causes are miserable,” he wrote in his final tweet. “Resigning ourselves to getting Omicron doesn’t seem right, especially since the surge may be short-lived. I still think it’s an experience best avoided – for you and your loved ones – if you can.”

After publishing his thread on Saturday, Wachter has updated the many, many people who read it by saying that his son’s condition has improved, still testing positive but with just a mild sore throat, and calling out the rather confusing new guidelines on whether folks should go back to work at this point.