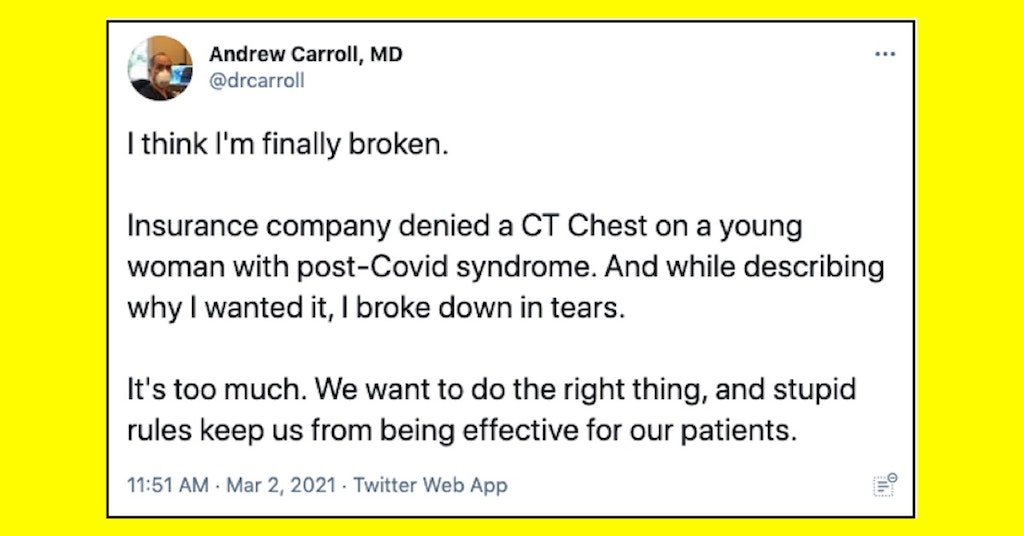 People have been saying the medical system in the U.S. is broken for decades, but it’s usually the patients going bankrupt or untreated who we hear from. Now, doctors are sharing how difficult it is to do their job with the way insurance companies work, deciding who gets what care even when it should be the doctor’s job to decide.

A doctor named Andrew Carroll tweeted about going through an incredibly difficult conversation with an insurance company that left him in tears.

“I think I’m finally broken,” Dr. Carroll wrote. “Insurance company denied a CT Chest on a young woman with post-Covid syndrome. And while describing why I wanted it, I broke down in tears. It’s too much. We want to do the right thing, and stupid rules keep us from being effective for our patients.”

Dr. Carroll’s post went viral, and people started replying to it with their own stories of wrestling with insurance companies, even offering a few tips on how to deal with the situation from a doctor or patient’s perspective:

In an interview with Bored Panda, Dr. Carroll elaborated on the issue with health insurance companies.

Dr. Carroll added that he has wanted to be a doctor since he was only five-years-old, and was dealing with serious medical issues of his own. His doctors then impressed him with their care and compassion and it was the kind of doctor he wanted to be.

“I wanted to do that for others, and so far I think I have done so,” Dr. Carroll said. “Insurance companies make it difficult though, and nearly force cold, inhumane, and compassionless rules on patients when they are most vulnerable.”