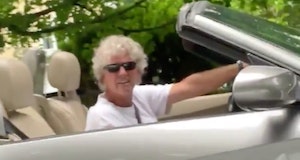 A white man who followed a Black woman through his neighborhood after saying she made him feel unsafe is now facing criminal charges.

Julia Santos drove a short distance from her house in Groveland, Massachusetts, to pick up a bag of free dog food another resident had offered up on a town Facebook page. As she started driving back, she says, a man later identified as Paul Birkhauser began tailing her in his car.

Santos eventually pulled over because she felt unsafe over the possibility of him following her back home, and Birkhauser pulled up beside her.

He asked her to explain what she was doing on his street, which she did, but he refused to believe her. After telling him that she pulled over because she didn’t feel safe, Birkhauser flipped the accusation back on her.

“I don’t feel safe with you driving around my neighborhood,” he said.

“Why? Because there’s just too many people,” he said, despite them clearly being on a residential street that was empty enough for him to pull up beside another vehicle in the middle of the road.

“I just said I’m Black, and is that why you followed me?” Santos asked again.

Birkhauser continued arguing with the young woman over what she was doing in the neighborhood until a woman in another car yelled at him for harassing her. He zoomed off and drove by silently one more time, slowing down before finally leaving for good.

Groveland Police got involved over the incident.

After the video went viral, internet sleuths did their thing and discovered the man’s name and address.

At some point, police became involved, and they have said that Birkhauser will be charged with disorderly conduct and disturbing the peace.

“Anyone should be able to drive or walk on any street without being made to feel like a criminal,” read a statement from the chairman of the town’s governing body. “The true story of what Groveland represents will not be the actions of one person but of the many who came together to support the victim in this case.”