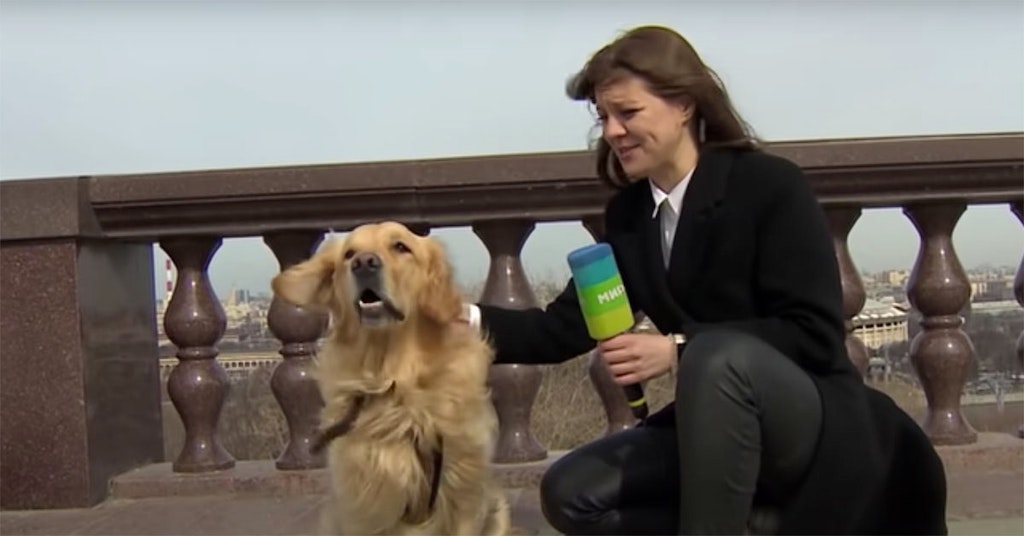 
A viral video from a Russian news station—which happened on April Fools’ Day—shows a dog making off with a reporter’s microphone during a live segment, to the delight of many.

According to People‘s account, the video comes from a Mir TV broadcast on April 1, in which reporter Nadezhda Serezhkina did a live weather segment with studio host Elina Dashkueva.

The YouTube clip shows the heist at around the :27 mark, when an adorable golden retriever comes up to Serezhkina, grabs her brightly-colored microphone, and runs off.

The clip then shows Serezhkina running after the dog, then cutting to a surprised Dashkueva, before finally going back to a split-screen showing reporter and microphone reunited—and with Serezhkina giving love to the adorable scamp.

A number of news organizations shared the video, though at least one misidentified the dog thief as a Labrador retriever. Ali Özkök shared the video to Twitter, further boosting awareness of the microphone-loving pup.

The Daily Mail, providing a translation of the broadcast, reporter that Serezhkina told her TV audience, once reunited with her microphone, that “No one was injured, but the microphone took a bite or two.”

It also noted that Serezhkina ad-libbed when talking to Dashkueva back in the studio, “Elina, as I said, the weather is truly perfect, just right for walking your dogs.”