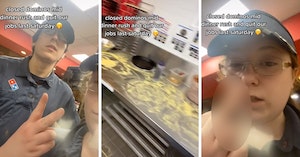 Managers at a Domino’s Pizza franchise made waves on TikTok after announcing they were quitting in the middle of a busy shift.

According to @mikaylaprindevill, their location had been understaffed and faced with other issues for sometime, but a recent Saturday night was the final straw.

“This is the end. Final moments,” she says in the video, panning her camera around a dirty store as the phone rings in the background. “Leaving it just how we f—king found it. F—k this job.”

Mikayla’s follow-up videos claimed that only she and another manager, Cody, had been on the job that night with a single delivery driver.

“Our zone spans across about six towns. So unless orders come in perfectly where we can do nice doubles and triples that are quick, the driver can be on the road for up to an hour per run,” she explained. “With that being said, we had about 15 deliveries on the board, maybe a little more, and then like five or six on the heat rack waiting for him.”

All of that, and it was already 9pm, leading Mikayla and Cody to realize there just wasn’t any way that everything would get done. She said the franchise owner seemed to have stopped caring about the store, leading to issues like this being the norm, which in turn caused other employees to quit and leave them even more short-staffed, and it just wasn’t worth making barely over minimum wage to keep putting up with it all.

“We had so much empathy for the driver, we were doing so much work for next to nothing, and it was just stressful,” she said. “Nobody should have to work that understaffed and just take it.”

For the most part, viewers were very understanding of their plight, as many have experienced being overworked and underpaid in the service industry themselves.

“Nah bc two ppl for a DINNER rush is not okay,” @ykkasiann13 wrote.

“Store makes bank but pays them barely anything I heard,” added @iamcarazy.

One viewer claimed “workers get treated worse at dominos than any other fast food I genuinely don’t understand why,” while @cornhair2020 hit the nail on the head with her suggestion to “normalize leaving toxic work places.”

An update a week and a half after Mikayla and Cody quit also claims that the location still hasn’t hired any new managers to take over for them.