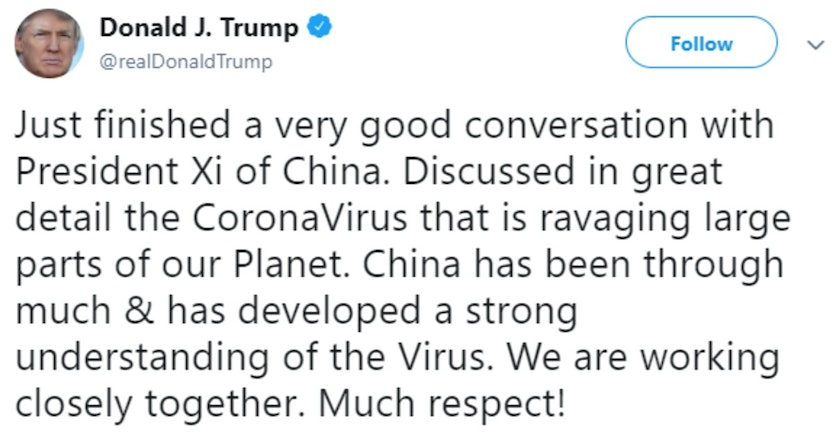 In yet another incredible example of a massive failure to coordinate social media posts, Donald Trump Jr. accidentally called his dad an “authoritarian/communist propagandist” for praising China’s leadership on the coronavirus pandemic. Just 12 hours before the president posted a tweet praising China for developing “a strong understanding of the Virus,” his son tweeted out this still-not-deleted gem:

Anyone praising China’s “leadership” in responding that the virus should be scorned for being the authoritarian/communist propagandist that they are.

This can’t even be dismissed as an April Fool’s prank because it happened on March 26/27 (Eastern time). It almost slipped under the radar because of everything else happening, but now that we’ve noticed it, we can’t not point out that just under half a day after Don Jr.’s tweet, his own father posted this:

Just finished a very good conversation with President Xi of China. Discussed in great detail the CoronaVirus that is ravaging large parts of our Planet. China has been through much & has developed a strong understanding of the Virus. We are working closely together. Much respect!

Authoritarian, sure, but we did not have “communist propagandist” on our Donald Trump bingo card.

In usual form, Don Jr. did not respond to any of the replies pointing out that he basically called his dad a communist, instead using all of his time to keep posting attacks on China.

But they’re totally silent on China and even ran with the communist regime’s talking points. The new lows keep coming.

Don Jr. has been a leading voice in the campaign to blame every aspect of the coronavirus pandemic on China, no matter how much racist hatred (including increasing hate crimes) this creates. The president has been contributing to this as well, in part by insisting on calling it the “Chinese virus,” but he isn’t known for missing out on a chance to kiss up to world leaders with a poor track record on human rights.

It’s honestly hard to decide which is worse. What’s not hard is rubbing this gaff in Don Jr.’s face.

Nobody tells @DonaldJTrumpJr anything. Especially his dad. Pity.

Okay. Maybe pick up the phone and call your dad? pic.twitter.com/BIrGDR5kA9

Well, this is awkward. pic.twitter.com/neo0tjINiY

You might need to adjust your talking points since your criminal father is now all good w President Xi. Not new that the Trump family praises communist authoritarians. Look at their love for Putin https://t.co/4fphgvUZIQ