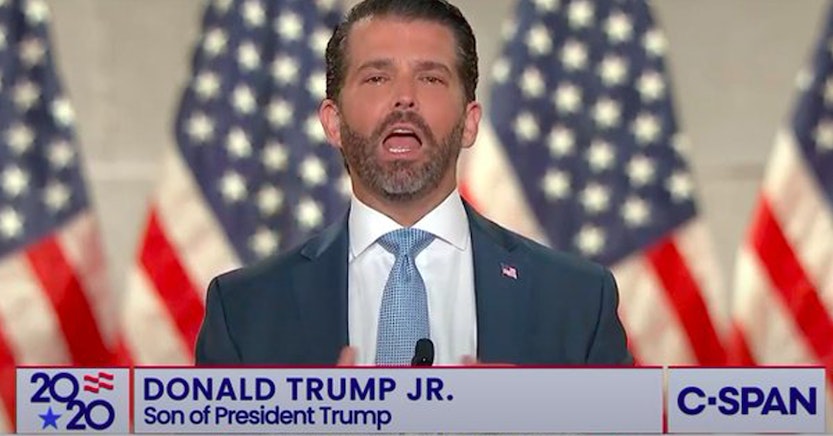 While watching Donald Trump Jr.’s speech at the Republican National Convention, I couldn’t help think how much this man just wants his dad to give him a hug. That and of course the facility in which lies pour out of his mouth. Also, Don? Leave the Loch Ness Monster out of this!

But others noticed something else about about Don Jr.’s speech (and his eyes), and “cocaine” started trending on Twitter.

Don Jr. has been one of his father’s biggest supporters, often imitating his mannerisms, words, and stances on issues. In recent months, Don. Jr. has parroted a number of his father’s false claims about COVID-19, including that the virus is being politicized by Democrats as a “hoax” intended to destroy his presidencey.

“Fortunately, as the virus began to spread, the president acted quickly and ensured ventilators got to hospitals that needed them most, he delivered PPE to our brave frontline workers, and he rallied the mighty American private sector to tackle this new challenge,” Don Jr. said during the speech.

In reality, Trump negated the significance of the crisis for months as well as discouraged Americans from practicing social distancing and wearing masks. As of current, the US has recorded the most coronavirus infections in the world—25% of known global cases despite having just 4% of the world’s population. As of Monday, more than 177,000 Americans had died from the virus.