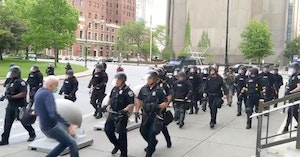 An elderly man named Martin Gugino was shoved by police in Buffalo, New York, after calmly approaching them. In a widely circulated clip, Gugino can be seen falling backward and smacking his head on the pavement. Unconscious, he begins bleeding from his ear. The police officers step over his prone body and keep moving forward. It’s a horrifying and disgusting scene, and even people who have been critical of protestors seemed to question the necessity of assaulting a 75-year-old man.

That’s probably why Donald Trump is now coming so hard for Gugino. Also, he has been watching conspiracy theorists on One America News Network (OANN), which is sort of like a Fox News channel for even more batsh*t people. Trump referred to a segment he saw on OANN in a tweet when he suggested that Gugino was an “ANTIFA provocateur” who was on the scene to “scan police communications in order to black out equipment.”

He also suggests Gugino “fell harder than was pushed.” Well, the president is pretty old, maybe it’s been a while since he’s been pushed, but your balance isn’t what it used to be in your mid-seventies.

Buffalo protester shoved by Police could be an ANTIFA provocateur. 75 year old Martin Gugino was pushed away after appearing to scan police communications in order to black out the equipment. @OANN I watched, he fell harder than was pushed. Was aiming scanner. Could be a set up?

I don’t even know why I’m trying to pick apart Trump’s thesis because it’s so obviously ridiculous. Gugino is a long time peace activist and well-known by the local community. And if you watch the segment Trump is referring to, you can see how unhinged this conspiracy theory community is:

Here's the first half of the batshit OANN segment Trump just tweeted. It alleges the 75 year old man assaulted by Buffalo police officers was an antifa operative, based on a report from Conservative Treehouse. pic.twitter.com/CeMVyJcoh8

People are outraged on Gugino’s behalf. Some seemed shocked that Trump would attack the old man put in the hospital for no reason, but I’m not. Trump has no lowest common denominator because he is uncommonly cruel. But even this has got people who are not interested in protests or justice pissed:

The President of the United States calling the old man an Antifa provacateur when he was a victim of elder abuse is just outrageous. Trump has no empathy whatsoever for actual human beings. He can also label anyone he wants as Antifa, which is scary and extremely arbitrary.

It isn’t enough that Buffalo police put 75-year-old Martin Gugino in the hospital. Now Donald Trump and the far right are trying to smear him.

So the 75 year old man bleeding from his ear after being shoved to the ground by a police officer deserved it? Wow. Just wow.

This man is unfit to lead our nation. https://t.co/JpewSjcPKI

When I see tweets like this, I often think of Susan Collins justifying her vote to acquit Trump by saying, "I believe that the president has learned from this case…I believe that he will be much more cautious in the future."https://t.co/88PNOauNua https://t.co/eJKxVNi0iI

He finds a new way to disgrace himself and pollute the office every day. https://t.co/81XlQiSzXM

The President of the United States is endorsing police shoving a 75 year old man onto concrete and leaving him there while he bleeds from his head. He's justifying it with conspiratorial claims about the man's cell phone.

I am curious about what Fox News thinks of all this. Are they jealous that OANN is taking Trump away from them? Will they adopt OANN’s conspiracy theories to attract him back, or go even deeper down the wormhole?