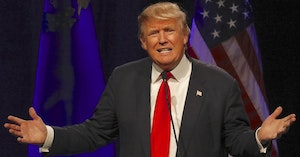 The ex-president has been railing against the FBI’s raid on Mar-a-Lago in early August, during which they seized boxes of documents, including 27 docs with classified markings and a number of empty folders marked “classified.”

According to Trump, however, none of the documents they found could possibly be classified because he simply thought about declassifying them, and therefore, it became so.

That’s what he told Sean Hannity during a sit down interview that went as off the rails as one might suspect.

Trump also went off on a tangent about how the only thing to justify the “severity” of the raid is if the FBI thought Hillary Clinton’s emails were at Mar-a-Lago, or “the Russia, Russia, Russia stuff.” After all, it wouldn’t be an interview with Trump if it didn’t involve pointing the finger in another wild direction or spreading conspiracy theories.

But viewers mostly focused on this idea that a president can change the classification of important government documents not only on a whim, but without telling anyone or doing anything about it.

There are, in fact, procedures for declassifying documents that go beyond magical thinking that makes it so, although whether or not the documents were classified is not actually at the heart of the raid regardless.

But who needs facts when you can say things like “as I understand it” and have millions of Americans believe every absolutely nonsensical thing that dribbles out of your mouth thanks to social media algorithms enhancing bias and public education gradually going down the toilet over the years?