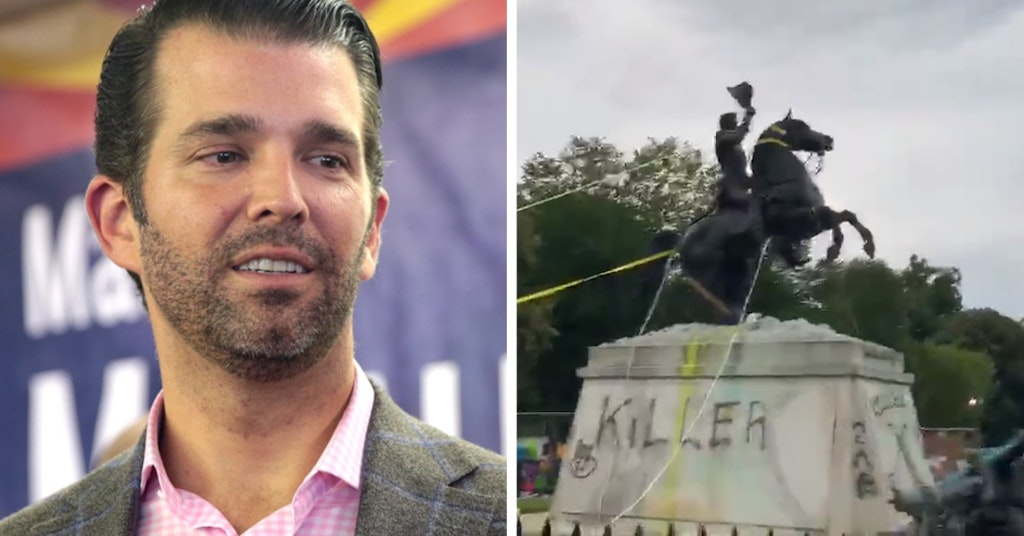 Donald Trump Jr. issued one of the more terrifying threats to come out of the family, though certainly not the most terrifying, by saying that Confederate monuments and other statues of slave owners and other awful people should be replaced with statues of the current president. In doing so, however, he seemed to admit that his dad is so fiercely despised by so much of the U.S. population that it would be highly effective.

Want to save our monuments?

Let’s get a movement going to replace any statue torn down during these riots with a new and more sturdy statue of @realDonaldTrump.

The nonsense would stop instantly.

Protesters against police brutality and systemic racism in the U.S. have continued for weeks across the country, with many of them targeting monuments to racist figures from history, including the statue of Andrew Jackson in Washington D.C. Protesters who attempted to topple the statue were attacked by police in riot gear, egged on by the senior Trump.

The president has threatened to punish protesters who participate in the removal of racist monuments with 10 years in prison, although this was already the standard sentence for this act of cleaning up America. Don Jr. went a step further, saying states who refuse to prosecute these helpful individuals should lose federal funding.

Criminals who vandalize & destroy public property, including monuments, should be immediately arrested & prosecuted.

And cities/states that refuse to do so, should lose their federal funding. The rule of law matters!https://t.co/NpliUpYH83

The statue of Jackson, the man responsible for the Trail of Tears, unfortunately still stands.

Meanwhile, Twitter users are horrified by the thought but not at all deterred by Don Jr.’s threat, explaining to him that such a thing would not stop the protests. In fact, that would just give them more statues to pull down, and doing so to statues of Trump would be particularly satisfying.

He's too clueless to understand WHY that would make it stop INSTANTLY.😂🤣😂🤣😂🤣 https://t.co/iYx3gE7yX1 pic.twitter.com/mn2bridrti

It's kind of great that Dipshit Junior understands that his dad is even worse than any racist, murderous Confederate general. https://t.co/nBO3mlZUu7

WAIT. So he wants to replace confederate statues being torn down with……

MORE STATUES THAT WE WILL IMMEDIATELY TEAR DOWN AND DEMOLISH?

These kids of his really are clueless, aren’t they?

Your family can fund it. 😂🤣 pic.twitter.com/S3oxOiJRO3

Not sure he understands what he's saying here

"Hey guys, a confederate statue is the lesser of two evils, amirite?"