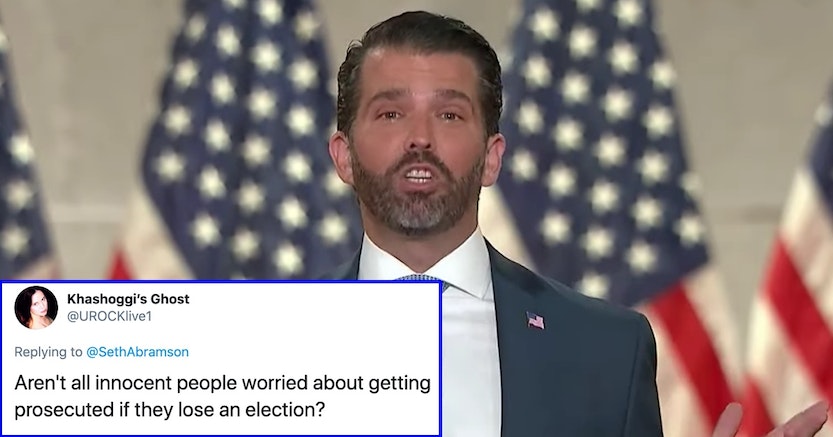 Donald Trump Jr. is worried that if his father loses his bid for reelection, the whole family will be open to prosecution for their alleged crimes, according to a recent profile in The New York Times.

The piece cites an anonymous “prominent conservative activist” who is regularly in touch with members of the Trump administration, including Don Jr.

“Don’s the only person who thinks they’re going to lose,” they said. “He’s like, ‘We’re losing dude, and we’re going to get really hurt when we lose.’”

NYT goes on to explain that Don Jr.’s fears revolve around the possibility of “federal prosecutions of Trump, his family and his political allies” — something that many Trump critics are pushing for, considering we know there have been a number of shady dealings swept under the rug during Trump’s time as president.

Andy Surabian, a spokesperson for Don Jr., denied claims that Trump’s eldest son has any concerns about the 2020 election.

“This is 100 percent false,” he told the Times. “Don does not have these concerns.”

Polls so far have shown Joe Biden winning over Trump come November, but polls also showed Hillary Clinton winning in 2016, so while it’s nice to think Don Jr’s alleged fears may have some basis in reality, it’s too early to get comfortable.

And President Trump himself has shown many indications that he will not go quietly if Biden is pronounced the winner on election night.

Not only did he admit he wouldn’t necessarily accept the results, but many fear his continued baseless insistence that the only way he could possibly lose is if the election is actually rigged is his way of setting up a narrative that would support him crying foul in the event of a loss.

It would, however, be a fitting end to the Trump stranglehold on the White House if the candidate who campaigned on locking a political rival up for imaginary crimes was ultimately prosecuted and jailed for all of his real ones — and if his corrupt family and administration got dragged along with him.

Of course, several people with ties to the Trump administration have already gotten a head start on all of that. Time to catch up, Trumps!