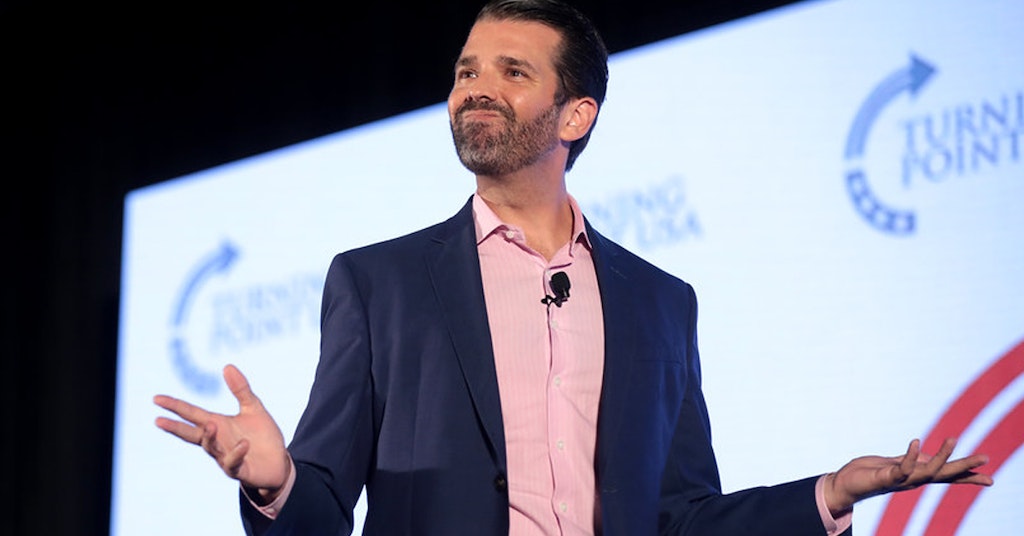 Donald Trump Jr. Tested Positive For COVID-19 And The Internet’s Got Jokes


In October, a ceremony for Supreme Court Justice Amy Coney Barrett set off a chain of coronavirus infections amongst White House staff and was likely the place where Donald Trump himself contracted COVID-19. Also confirmed as having the virus then were former New Jersey Gov. Chris Christie, Kellyanne Conway, Republican Sens. Thom Tillis and Mike Lee of Utah, and University of Notre Dame President John Jenkins, according to NBC News.

Now, it's Covid Round Two: Infectious Boogaloo at the White House. CBS News reports that Donald Trump Jr. has just tested positive for the virus. He is apparently asymptomatic and has retreated to his private cabin in the woods to quarantine.

"He's been completely asymptomatic so far and is following all medically recommended COVID-19 guidelines," a spokesman told CBS. That's good to hear, though if Don Jr. has been wearing a mask around his dad, I'll eat my hat.

The reactions on Twitter are about what you'd expect, though the social media platform has not yet warned users to stop wishing for Don Jr.'s continued poor health.

Don Jr. is the first of Trump's kids to test positive for the virus, which maybe means even Ivanka is keeping her distance. Rudy Giuliani's son Andrew, who has been working as a special assistant to the president said he'd tested positive for the virus on Friday. Giuliani himself is supposedly negative for COVID, but someone should really check in. There's obviously something wrong with him.