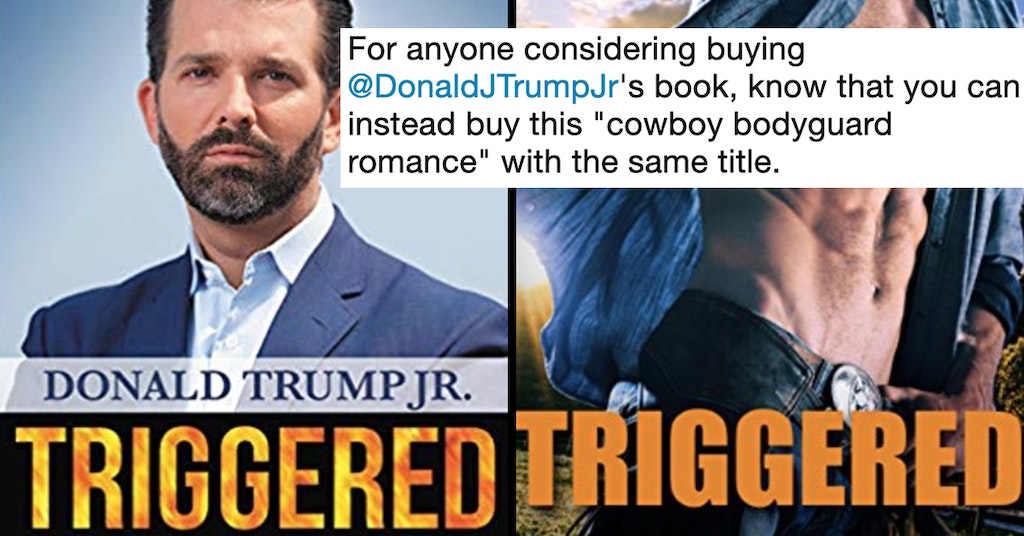 The release date for Donald Trump Jr.’s new book, Triggered: How the Left Thrives on Hate and Wants to Silence Us, has just been revealed as November 5 by Axios, which says topics will include “free speech, censorship and Big Tech.” Comedian Jon Bershad of College Humor and The Onion has an alternate recommendation for holiday reading this year.

For anyone considering buying @DonaldJTrumpJr's book, know that you can instead buy this "cowboy bodyguard romance" with the same title.

It's $12 cheaper and, when the characters beg "Daddy" to "give them more," they're asking for cock instead of inheritance. So it's less gross. pic.twitter.com/aTIYWWbd8S

“For anyone considering buying @DonaldJTrumpJr’s book, know that you can instead buy this ‘cowboy bodyguard romance’ with the same title,” writes Bershad “It’s $12 cheaper and, when the characters beg ‘Daddy’ to ‘give them more,’ they’re asking for c**k instead of inheritance. So it’s less gross.”

There is something a bit more attractive about the romance novel, however, and yes that is a direct reference to Don Jr.’s looks.

Additionally, if you Google “Triggered book,” the first result is the 2012 autobiography Triggered: A Memoir of Obsessive-Compulsive Disorder, because back then the term “triggered” was still just a common psychological term that people could use without evoking Don Jr. and other unfortunate public figures.

Bershad’s joke about the upcoming book, though arguably the best one, is far from the only one on the topic today.

Speaking of triggers, Don Jr. said gun suppressors are a great way to get kids into shooting. pic.twitter.com/SM70ZEhsfT

Is Donald Trump Jr’s trying to tell us that he’s… been triggered?

What a delightfully ambiguous title choice for your book, Don! pic.twitter.com/PKFOHUZLnP

Hafta pay those hefty alimony payments somehow now that stealing from charities is temporarily off the table.

See you have taken up daddies projection habits

As an author, I want to thank you for writing this book. We need to document the stupidity, the insanity and the lawlessness of the Trump administration. What could be better than a first-hand account from the Traitor-in-Chief’s son? If it’s what you say it is, I love it!

Spoiler alert, that’s what MAGA is all about, triggered white people.

Others have come up with alternate titles for the book.

Triggered is a dumb title so I came up with some better ones. pic.twitter.com/9jN8vkckWy

you left off his newest one: “The hood, the bad and the ugly”

It was nice of Don Jr. to make a book cover with the title on a black background, making it so easy to replace said title with alternatives. Everyone should take advantage of his generosity. Don’t worry, he certainly won’t be triggered by it, because only people on the left get upset about things, right?