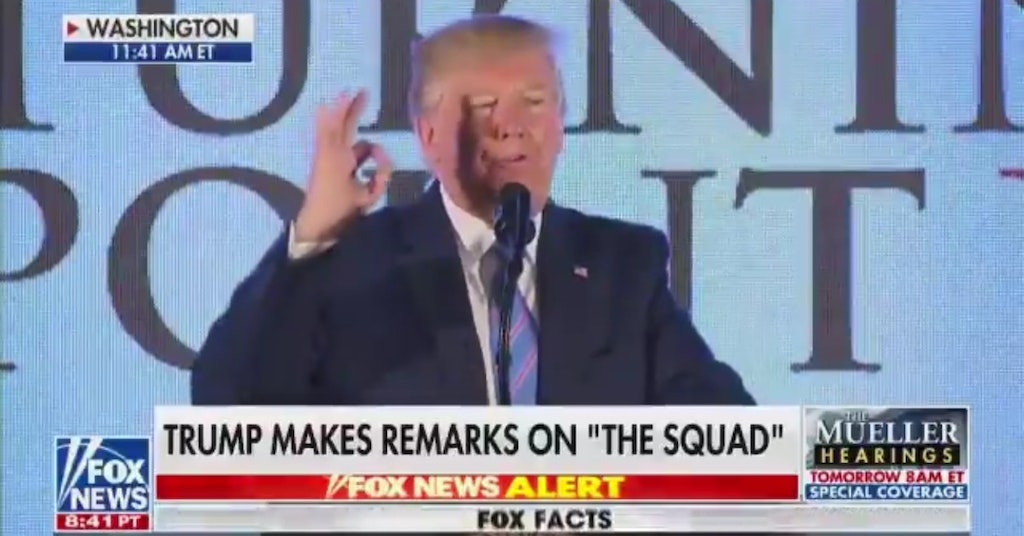 Donald Trump is always in a feud with the Democrats, but in the last month he’s been particularly focused on four new congresswomen: Ayanna Pressley, Ilhan Omar, Rashida Tlaib, and Alexandria Ocasio-Cortez.

Things began to get especially out of hand after Trump tweeted they should “go back to their countries,” implying the legally elected United States representatives somehow didn’t belong here. Trump was officially called a racist by Congress, which he took offense to.

Then he led a campaign rally in a chant of “send her back,” referencing Rep. Omar.

Here's the President of the United States standing before a crowd supporters who are chanting "Send her back!" to a duly elected American congresswoman, who was born in Somalia.

He does nothing to correct them. pic.twitter.com/AqYwicJhuy

Trump’s obviously a racist, but how far is he willing to go to pander even further to his racist fans? Pretty far.

Some people are saying that Trump flashed a hand signal associated with white supremacists while discussing AOC during a speech on Tuesday. The moment was captured by journalist Aaron Rupar:

People are suggesting that Trump is merely holding his hand up like that to indicate the hand gesture that is generally known to mean “Okay.” Maybe because “A-Ok” sounds vaguely like “AOC,” and he has a brain full of worms? Hard to say.

The gesture as a symbol of white supremacy is hotly debated. Some say it was a prank started on 4chan in the last few years, and wasn’t historically associated with white power creeps.

No, the OK Hand 👌 is not a symbol of white power

But if someone is using it to mean “white power,” does it matter how it started?

It’s not perceived, it “IS” being used as a symbol of hate. This is the New Zealand shooter. I guess he’s just “ok”. pic.twitter.com/TmOIpeOAdm

It’s a white power symbol, invoked by Trump as he mentions the name of a woman of colour.

But hey, don’t worry: Obama once saluted a Marine with a coffee cup in one hand and it was a proper controversy for days. https://t.co/44uXMpBtuT

It's a common tactic of the modern breed of Internet far right to take a well used symbol and appropriate it for something else.

This means they can a) hide in plain sight, and b) make people calling them out look bad, saying "it just means ok, you hysterical liberal snowflake".

It’s also been something that’s happened a lot with this administration:

Kavanaugh’s former law clerk Zina Bash is flashing a white power sign behind him during his Senate confirmation hearing. They literally want to bring white supremacy to the Supreme Court. What a national outrage and a disgrace to the rule of law. https://t.co/uQGOpNa6xg

Also, it seems like 4chan wanted to make a white power sign that has all the dog-whistles and power of intimidation while retaining plausible deniability by saying it was a hoax to trick liberals. This is dangerous. Stephen Miller and White House officials are in on the hoax?

Here is Stephen Miller making a white power symbol. This is not an “accidental” configuration of his hands or fingers. pic.twitter.com/LAmf2zWL5C

It’s very understandable why this trend would be upsetting, and Trump is certainly king troll of trolls. But there are also so many explicitly and open racist things he’s willing to do, it’s hard to imagine him feeling the need to disguise it or do anything as subtle as a two-second hand gesture. We’ll see if this becomes a trend at his rallies or if he sticks to threatening journalists and inciting violence.